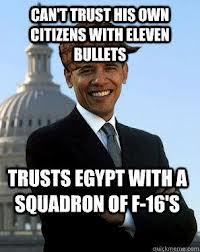 U.S. will go ahead with delivery of F-16 fighter jets to Egypt, des...

I've got a tough time blaming Obama for this inane maneuver.  Let's face it, our congress, especially the House of Representatives are dropping the ball on this potential fiasco.  Isn't the House the people holding the purse strings?  And my understanding is that these F-16's aren't being purchased by Egypt, but America is presenting them as a gift.  Now, with Obama's puppet and bestest Muslim Brotherhood buddy on the outside, just who exactly is going to be the recipient of such a fine and destructive gift of 20, fully armed F-16s fighter jets?  Sometimes it gives me pause to think that we have a House of Representatives in D.C. with the ability to literally de-fund any taxpayer gift to anyone, and yet Obama is going to be allowed to spend taxpayer money on this disaster, while our representatives are simply just going to look the other way.
Perhaps all of our congressmen are overly engrossed in the George Zimmerman murder trial taking place in Florida.  Which by the is a completely misleading term.  There is NO George Zimmerman murder trial.  By referring to it as a murder trial, is to assume that a murder has been committed, which it hasn't.  What we have in Florida is the George Zimmerman self defense trial.  Make no mistake, George Zimmerman isn't the only one on trial here.  Every gun owner, who legally carries a weapon for self defense, should be keeping a very close eye on the outcome of this kangaroo court trial.  If Zimmerman is found guilty of even a lesser charge, all of us will be presumed guilty until proven innocent.  Especially if the person you/we shoot/kill in self defense is a young Black man that could have been Barack Obama's son.  I digress, begging your indulgence for my last rant, please accept my apology.
Back to the F-16s headed to Whoknowswhere, Egypt.  We have a congress that represents the people, or at least they're supposed to.  They are commissioned to be good stewards of the people's money.  Understand, please, the money our government spends with approval of our representatives, does not come out of some obscure private congressional checking account.  The money approved for expenditures is the "People's Money."  So for that reason alone, some one or several of our representatives should be able to un-glue there eyes from the TV and at least question this F-16 gift to Egypt, especially now when there is no real organized government in command there.  Or am I being too cynical?
This is just another administration scandal in progress, isn't it?   Am I seeing a country full of radical, Christian and Jew hating Islamists about to take receipt of enough fire power to decimate most of the countries in a 500 mile radius of their own?
Congress, if you have anyway of reading this Blog Post, think about what you are doing, or what you are allowing Obama to do.  I know you have access to my Blogs, call the NSA, they're recording this even as I write, I'm sure they'll give you a copy.  "Get your heads out of your butt's, and defund this coming catastrophe.  You do understand, that anything this president does during his administration, under your so-called watchful eye, will be blamed on those who allowed it to happen.  Look at the dire potential here congress.  20 F-16s in the hands of radical Islamists!  Regardless of what country of barbarians, this is going to extremely detrimental to America's interests in the Middle East,  not to mention that we still have American troops on the ground in that part of the world.  So you're willing to trust that they will not be in added danger because...  That's what I thought!!!  I'm a Marine Veteran from the Vietnam era, and one thing I learned a long, long time ago, is that you never, ever arm your enemies.  That especially goes if you aren't really willing to identify who your enemies are.  Wake up Congress, it's time to call a Muslim a Muslim.  It's time for you all to realize that this President's interest isn't the welfare and well-being of the American people, especially if they are Christian or Conservative.  It should be a no-brainer to understand that Obama's concern for people in the Middle East, whether it be in Afghanistan, Iran, Iraq, Pakistan, Libya, Egypt or Israel, doesn't include Christians or Jews.
Even to someone with only a partially functioning cerebrum, sending 20 F-16s to Egypt at this point-in- time, is not, even by stretching the meaning, a good idea.
God Help Us
Sincerely,
The Watchman

Tweeting this out, Jerome!

Barbara Leypoldt replied to Robin's discussion Barr Announces Multiple Lawsuits as Part of DOJ Crackdown on Sanctuary Cities.. California, New Jersey and Washington
"ICE isn't playing around any longer. They are issuing subpoenas for all sanctuary cities and…"
19 hours ago

Barbara Leypoldt replied to Susan Taylor's discussion FORGET PARIS: United States Led Entire World In Reducing CO2 Emissions In 2019
"You will never hear this on the news. They just keep pushing this climate stuff and NEVER go after…"
20 hours ago

Wow! Dershowitz, “That’s going to come out in a lawsuit in the near future. Yeah.”Harvard Law…See More
20 hours ago
0 Comments 0 Likes