While checking out the stew meat, I was aware that I was sharing space with two folks to my left.  One was a little old lady…is that term PC?  She was little and old AND a lady (I think)...and the other was an attractive man (I think he was a man, but these days) about my age, which is a little less old than the fore mentioned LOL (little old lady).

The man was holding a package of Smart chicken and was saying something to the LOL.  Then he looked directly at me and asked, “Will this make me smarter?”  A little taken aback that this good looking guy was talking to me…ME…I answered, “Not sure, but I guess you could give it a try.”  Ok.  Not my best work which is probably why he took the package of Smart chicken and walked away.

Just then, the LOL turned her cart around and asked, “Do you know…does sauerkraut come in a bag?”  Not being a fan of the foul-looking stuff with ‘sour’ in its name, I responded, “Hmmm, I think I’ve seen it in a bag.”  She came back with, “I know it comes in a can, but I’m not sure about a bag.”

“Ya know…I don’t know,” I said.  She let me know that she was going to ask ‘the man’ and she wheeled away.

And there I stood, by myself in the meat department, pondering those two very odd questions.

Now anyone who knows me knows that I don’t like not knowing.  I also happen to be a big fan of the quote from Thomas Jefferson:

And since these two grocery shoppers both quite boldly asked, I decided to find out.

I went to the now world-controlled internet and typed, “does eating Smart chicken make you smarter?”

According to 9 foods to eat to give your brain a boost, not only wasn’t Smart chicken on the list, dumb chicken also wasn’t on it.

So I went straight to the source, Smartchicken.com and found the claim that their chicken TASTE better than regular old dumb chicken, but nothing concerning intelligence enhancement.

I also found this: 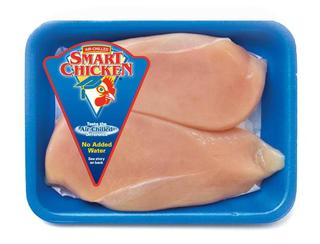 The Smart chicken above sells for $12.99 per pound.  In what appears to be approximately a pound, Tyson® All Natural Boneless Skinless Chicken Breasts at Walmart sells for $3.43.

So from my research, I’m concluding that the only way Smart chicken will make you smarter is to put it back on the shelf and buy the cheaper, natural, plain ol’ not-smart chicken.

Now to the second burning question…

I found this at pinterest…Best 1 bag or jar sauerkraut recipe.  There were no bag pictures, which compelled me to dig deeper.  And guess what?

It also comes in a jar…who knew?!! 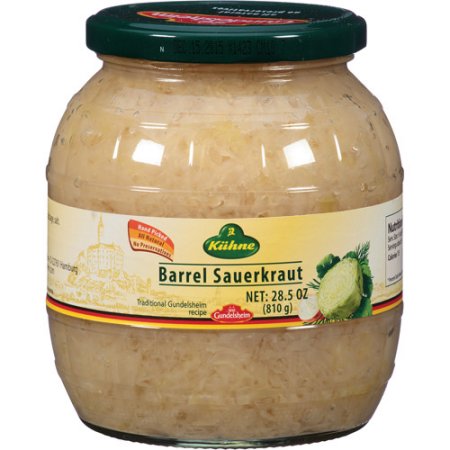 So, armed with this new knowledge, I can now proceed into the new year with the confidence that should I ever be asked these two questions again, I can supply the answers with undoubted assurance.

I may hang a bit longer in the meat department next time in case the good looking guy comes back.  Ya know…just so I can give him an answer on chicken and its correlation to intelligence. ;-) I just hope he wouldn’t ask me if beef tongue tastes good.  I’d really hate to do that research.  Ick.

Now go forth and question with boldness…even the very existence of sauerkraut in a bag.

Hahaha! I love this post, Jodi! I loves me some sauerkraut in a bag or can or jar. Being German and all. You are hilarious!

Great post!  You provided the incentive for me to finally see what Smart Chicken actually is.  Besides being grown here in Nebraska, they're processed differently than other chicken processing plants.  I was actually impressed.  Not so much with the "organic" nature, but with the way they're raised and slaughtered.  They kill them much nicer than my aunt used to with a twist of her wrist, breaking off their heads.  Then their bodies running around for several minutes (it seemed.)  (Sorry if that was TMI.)  Check out this article:  Smart Chicken

I'm not German, but I love sauerkraut. I knew someone who made her own.  I've never been that brave (or ambitious.)  I think I will try the bagged kind.  It surely retains more nutrients than the canned, right?

Happy New Year to you and yours.  And to everyone here at FR!

Thanks for the laugh jodi, as well as pertinent information on the not so smart smart chicken, hehe. I like sour kraut, so I am aware of the bagged kraut, which is costlier than canned or that in a jar. As for the beef tongue, you may want to research it, as that could very well be the next question of that good looking man. ;-)