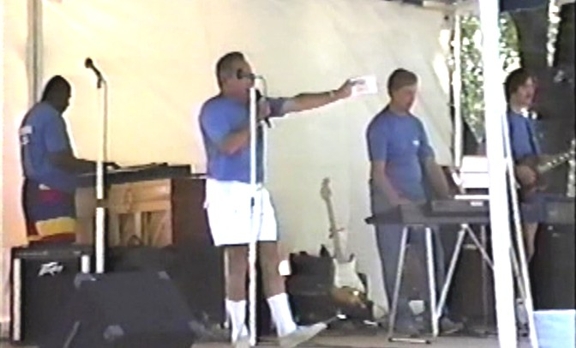 Above:  Company Division talent Show 1990. I was in charge but had great helpers. I put together a back up band since many from the inner city had great voices but no musical instruments. I am third from left playing keyboard and also rhythm guitar (Fender Strat behind me). The guitar player to my right played lead guitar and was better on guitar than I was. Drums and bass players were there but did not make the photo. The African American population wanted a talent show like the Harlem "Apollo" show. We had maybe 30 or 40 acts, and likely over 1000 in the audience. The person singing here was the emcee... the token white singer... ha ha. Well, many of the Black singers had greatvoices. They told me they learned from Church. 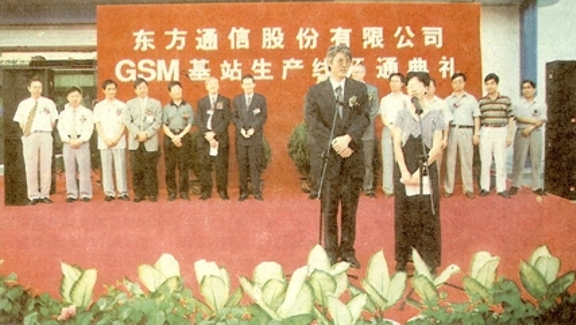 Hangzou China trip - perhaps 1996. (this one from the China papers) I was one of three speakers - a real setup ha ha since I learned that the other two were Chinese. I am in the back row in this photo I think, two left from the current speaker. Yes, I used a translator - the lady in front. Easier with one. This one, the lady, was beyond great. She was the best I had seen in any language, and I had worked through a few. She did stare at me when I was congratulating the workers, the people and the investors looking for cheap applause which I got. I figure she was jealous that I could go on with no real speech. My advice? Have to do a speech, but have none? Thank everyone. Congratulate them. Smile when they applaud for themselves. Then sit down. They like that last part also. 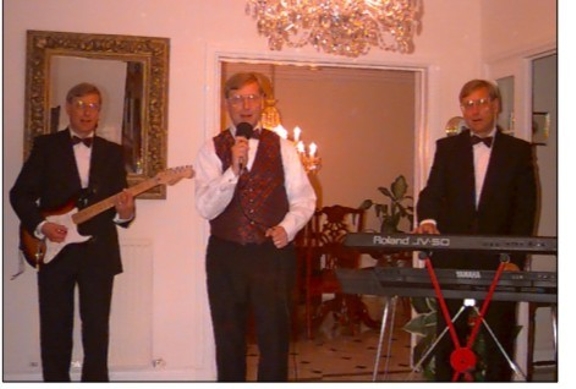 Above: Having been in bands, I began my own one person band music. The photo above was my first really "photo-shop" attempt, and I recall being disturbed how easy it was. My one person band music is one click away from http://www.ronplachno.com/ - which might be my name, or it might not. It could be the name of one of my therapists who lock me up at night. This photo was done during a 3 year stay in England and likely was 1997. 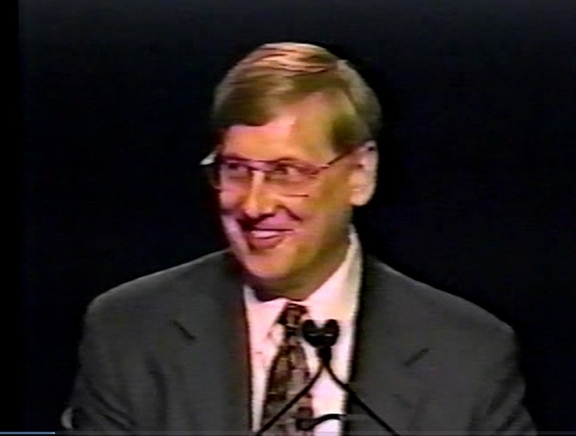 Above:  Me, in about 2001 speaking at a large corporate patent dinner in a big fancy Chicago hotel. There were like 5 speakers and we each in turn used teleprompters. This photo was a still photo I took from a DVD I made of the videotape copy they made for me. I was not supposed to be a speaker, but my boss said he was protesting the company. My opinion of teleprompters? Any boob can use one ... as you can plainly see by the above. I had only 5 minutes of lessons before the crowds arrived - most of which was the technicians yelling "Don't Freelance! Just Frickin' Read !!" Well, I freelanced just a bit when congratulating patent winners who came on stage, but otherwise was a team player. Easy? You bet. I did pick a still photo where I was smiling. And no, no photo touch up. It would take too much work. You see? I was Judy Garland's stunt double - and of course therefore this is a very bad photo of me. 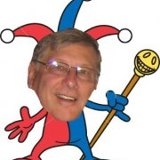 Above:  Current photo? Just this. My real current photo is used by exterminators to scare off house pests, so I did not use it here. But I did make the above copy which I use for facebook. Since I do not trust Facebook, I just some days post jokes when I am able to stop myself from commenting on news items. And yes, I really do look like this now. I have gotten much smaller, but did get a tiny jesters outfit for Christmas. One relative, a college girl, told me that I should care a whole lot more about my image. I did not respond. However I sort of thought how young she was. One person once told me "Never take yourself too seriously".

Anyway, this stuff is likely more than anyone wanted to know about me. But, Engineering, news, writing books, doing music, humor .... and a great family ... sort of keeps me occupied. If you do listen to my one person band music heed the warning at that site - if it sounds amateurish - its really okay. I am an amateur. My music has been used to get confessions at Gitmo and I hear confessions are way up.

Hey there, RN! It's great to finally see who I'm talking to! Loved the pics and what you wrote! As usual, you humor added in is awesome! :)

RN, thanks for posting those!  I enjoyed it, and the little snippet of your life!  I got brave and added a 'closer'-up photo for my avatar.  Love the humor, keep it coming!