If you do go see the movie "Noah", for God's sake pick a theater seat higher up. Some in the first seats got splashed and a few of them only survived since they used their popcorn bags as flotation devices.

How was the movie? I would say "Forget the critics and form your own opinion". Listening to the critics, they seemed to deal in extremes for this movie. Some said it was religious, some said it was anti-religious, and some said it was political. After listening to the critics before seeing the movie, part way through the movie, when I felt it was "none of the above", I began to ask myself, "what is this ****** thing?" Then for my tastes I decided that the movie had no obvious agenda, at least for me. It is what you get when Hollywood "tries" (key word) to do the bible. First Hollywood takes Russell Crowe from the Gladiator movie since he is clearly used to having dirt and mud on his face. Then add Hollywood CGI, some fantasy with more CGI, some bible references (but let us keep our head here ! ), some Hollywood social feelings, and a few good lines, and you have this movie. Yes, or just say simply - "It is how Hollywood would do the Bible." There were even some touching deep lines in the picture. Now don't get your hopes up, it was just a few, but more than most movies. And I so I did not see an extreme agenda outside of the word "Hollywood".

The only extremism I would label in the movie was that Noah was a vegan. Well, duh....., who else would you put on a ship with just two of each animal? Colonel Sanders?

But my advice - forget the critics. If you see the movie, no matter what you make of it, I feel you will be far more accurate than the critics. I am glad I saw the movie. In just a few weeks I will figure out what to make of it, ha ha.

You are a wonderful person as always JG.

I thought this would fit with your post... it made me laugh! 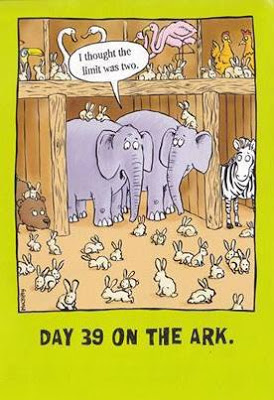 Then Noah agreed.... that the woodpeckers were a mistake ... as the ark slipped down into the water....