Being a male who does not choose to be gay, I like women. A lot. They are my favorite gender. But I do worry about them. Too many on this earth try to subjugate them. And because of society, some women make themselves overly submissive. That is not my idea of a good time. Unlike some other males, I love the US where strong women become partners with men instead of male favorite pets. I would far rather have a partner, since what says, I am going to get everything right? I would be lost without the leadership my wife shows in a number of areas. We each have things we do. Plus partnership means true companionship and warmth. Something most of us need.

While idiots, and we seem to have plenty of them, say that Christians demean women, I do not see that at all. Being a Catholic all of my life, I learned early that Christianity is based on free will. And so while you get a message one hour a week, the rest of the week is up to you. Unlike the government or Muslims, there are no police to stop you. And so Catholics have been practicing birth control as long as I knew what that was. Why not? Free will. I also do not recall Jesus sermon on the mount where he told us to not take the pill. Perhaps over time, the Church, but not Jesus, got that wrong. But, we need to move onto the real issue.

Some males, Muslims and more, treat women as second class citizens. That bothers me a lot. Some of us think of Saudi Arabia as a moderate Muslim country. Really? They likely behead more than Isis. Women are not allowed to drive. There is not a single Christian Church allowed. And let me guess that if a woman is raped, she has to shut up as in other Muslim countries since unless she has 4 male witnesses, she will be whipped for having sex - which they claim was on purpose. Disturbing. And so male dominated societies, like Muslims and more, have always treated women badly.

But women sometimes also treat themselves badly. How? Well, let me start at the beginning. I talk at times to a number of women. Here is the shocker. I find little real difference between how women and men think. Yes, I know some will scream at me, but I do not care. Women and men often have very similar concerns and very similar ideas of right and wrong. So, then, what goes wrong? Society. Long ago I felt that society is more lethal to us humans than Christianity ever could be. Society screams women must dress this way, and men another way. Women's blouses must button in one direction, and men's in a different direction. Girls must grow up with pretty dresses and play with dolls and boys should play army soldiers with guns. And women are taught to be submissive and to sit on a shelf and wait to be chosen, and guys get to do the choosing. Who decides this stuff?

But, what if instead, girls were given the army soldiers and toy guns and boys were given the pretty dresses and dolls when young? I think the results would frighten many people - but not me. I see a number of articles in the news lately where a family insists that their little boy age 4 or so wishes to be a girl. No. They put the boy in dresses when he was young and gave him a doll. And after a while, the child liked that and thought it was normal. A four year old generally has no clue.

* The Story of O, about a very submissive lady, was written by Pauline Reage (pen name) who was really Anne Disclos.
* The Sleeping Beauty Book Trilogy of princesses and princes submitting to crazy stuff in a fairly sick castle was written by Anne Rice.  (what is it with these Annes?)
* 50 Shades of Grey was written by E L James, who is really Erika Mitchell

As for my opinion of the above books? I already gave that in the print above that. If it is mutual play time, fine. But as soon as things look mean to me or damaging to a person's self worth, I want to be somewhere else, and fast. I believe that all humans deserve respect. The truth is, I cannot even stand to watch a movie where so called lovers yell at each other ... and so meanness beyond that, is well, even much worse.

And so, what is going on? I do not know. But I am guessing that some women buy into this submissive stuff so far that they would rather be treasured and deal with a whole bunch of crazy stuff than be ignored. But I seldom call those authors and ask them.

And I worry. As I said above, if adults wish to play, that is all fine, at least with me. But I worry that there is a line. There is a line that humans should never cross. That line is one that gives one gender less respect than the other. I think that can lead to a loss of self respect, and that loss of self respect can lead to some women or girls cutting themselves, or even suicide. And yes with this kind of attitude of mine, I really dislike Muslim law when it makes women second class citizens. If for no other reason, that is why the world should worry about Muslims.

I do not want to end this on a bad note. Yes I worry. But I think both genders, for the good of humanity, need to stop this stuff. The genders need to respect each other. And if they do, I think the rewards can be huge. Family life can be a far richer partnership. As for play, if guys really wish to dress up as Goldilocks during play time, that is up to them. But please try to get a decent wig and get the makeup right? This would seem to be a good place to end this.

The timing was odd.  Right after I wrote this, Isis starting offer slave women for sale.  The highest price is for women who are 9 years old or less.  And so we can add the word "pedophile" to the sick Muslim extremists who already do slavery, rape, torture, beheadings crucifixion, burning alive and more.  As for those who applaud these sick pieces of human garbage we call Muslim extremists and persecute Christians and Jews in our schools while forcing kids to learn the 5 pillars of Islam, words cannot express what a sick monster of evil and stupidity those principals and teachers are. 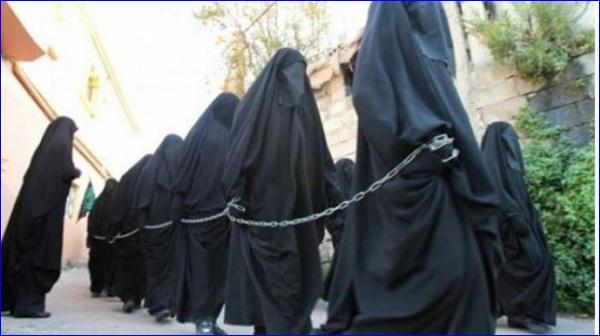 "The hottest place in Hell is reserved for those who remain neutral in times of great moral conflict" - Dr. Martin Luther King Junior