I am attempting to put together a presentation to prove to my neighbors that the UN Agenda 21/ICLEI initiatives are being implemented in my community and others that surround Omaha, NE.

Omaha (and Lincoln) are dues-paying members of ICLEI-Local Governments for Sustainability....International Council on Local Environmental Initiatives.  Listen to Tom DeWeese, president of the American Policy Center, as he delivers a message on Agenda 21 (Omaha and Lincoln are mentioned at the 3:32 mark):

Don't believe that Omaha/Lincoln could be involved in such a thing? See the ICLEI members here (check for your city):  http://www.iclei.org/index.php?id=11454

So what has Omaha been up to for the past few years regarding sustainable development?

ICLEI-Local Governments for Sustainability USA has announced the cities of Lincoln and Omaha, Neb., as its newest members.

ICLEI USA is the U.S. affliliate of the international association of local governments addressing climate change and sustainability. The  Nebraska cities helped the organization reach two significant milestones: it's U.S. network now includes more than 600 local governments, and it now has members in 49 states.

Omaha is the largest city in Nebraska with a population of 454,731. It is home to the University of Nebraska and Creighton University. The city is in the process of finalizing an Environmental Element for the its comprehensive plan and developing a strategic comprehensive energy management plan and implementation framework

Lincoln is the capital of Nebraska and the second most populous city in the state with a population of 251,624. It is home to numerous higher education institutions.

On the other hand, the city would do well to turn its attention to upping public transit ridership. In our survey, it 48th of 50 in this department. Mayor Mike Fahey is thinking about resuscitating the city’s old streetcar system; he might also consider offering alternative transportation subsidies, as many higher-ranking cities do.

The biggest limitation to making Omaha more sustainable may lie in getting more people to buy into the idea of living green, says the mayor’s deputy assistant, Andrea Fox. To help with outreach, the city is collaborating with the Green Omaha Coalition, a group that aims to promote a healthy, sustainable community through public-private partnerships, educational programs, and proposing policy solutions. 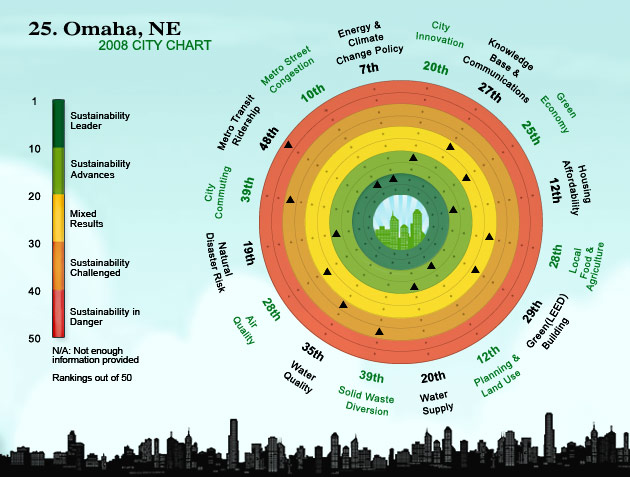 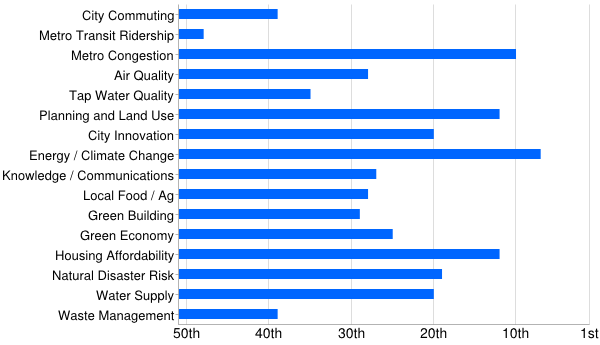 Visit the EECBG website from the Department of Energy.

Over the past 12 years, more than a billion dollars has been invested in building and renovation projects in Omaha's north downtown neighborhood and the adjoining riverfront, home to the CenturyLink convention center-arena, the site of Berkshire Hathaway Inc.'s annual shareholder meeting. That's according to a running tally kept by the Greater Omaha Chamber of Commerce.

The work is still in progress; in many ways, it's just beginning. It has not been universally popular in all its aspects, yet there's no denying that a remarkable transformation has taken place. Omaha has turned what was mostly a gritty industrial zone suffering from age and neglect into an urbane business, residential, arts and entertainment district.

How much this baby has grown, and how fast, surprises even some of the people who birthed it.

Some of the big pieces include:

A lot of taxpayer money has gone into the developments, notably the arena-convention center and such infrastructure as streets and sewers. Many of the ideas came from city planners, and HDR Inc. was hired to map out future progress in the 2005 North Downtown Redevelopment Plan.

If my math is correct, that $83M/year....every year....for 12 years....for mainly arts and entertainment projects.  Mostly paid for by taxpayers.  Even the people who birthed this insane Omaha agenda are surprised by the things they've been able to accomplish while the citizens sleep through their implementation of 'the plan'.

Have I convinced you that Omaha is fully on board the AG21/ICLEI train?

Next argument......proving that the surrounding communities are following Omaha's lead.

JG...bravo!  As much as they try to tell us, the TP is not dead.  Who knew people would actually wake up and get involved?

I've seen this vid before, but have saved for my ever expanding 'file'...just in case I don't have it...because it's really good.

I recently visited my town's website to read the latest council minutes.  Just for s**ts and giggles.  Guess what's in the works?....a splash pad.  A truly unique idea.

Guess who the planner is?  The same Omaha planner for the city I've been calling out since spring.  We are a town that recently touted a population of 1500.  I've printed out the comprehensive plan and will dig in to it later.  The comprehensive plan is 106 pages.  Did I mention we're a town of 1500?

Beck says he's got an upcoming project "for all those who have been trying to 'out' AG21".  I'm anxiously waiting.  Feeling a bit lonely on the subject.

But great to hear that people in your community has some sense!  Thanks for the vid (and the never-ending support :)

You're most welcome, Jodi!  I included that video because we had to eliminate our video section because of some coding glitch (uh... like I really understand THAT! LOL) and I wasn't sure if it was within any of the posts.

I know we are active, and engaged, and the 2010 local and state wins were huge, and I have said all along that they will have a major impact on 2012. The media chooses to ignore this, and make folks think it is all over, and give up.

The left cannot grasp the fact that the 'tea party' has graduated from standing in parks waving signs!  LOL we out-organized the organizer himself in 2010!

I'm very interested in Beck's outing AG21. Maybe THAT is what need in our reference tab?  I rarely get to hear him anymore, and can't get the internet station, and naturally, I don't have DISH..... so please keep us posted on it!

Thanks, girlfriend!   I understand the feeling of loneliness on an issue, and try and take some comfort that our greatest strength is in the little groups across this country that are making the difference one voting precinct at a time!  It is working, and so are we!