new Executive Order signed on March 16, 2012, gives Obama the power to seize all forms of transportation, food, and any other civilian services including health care, for national defense, as well as to conscript necessary persons for a National Defense Executive Reserve.

This is an all-inclusive E.O. that executes total control over everything from home gardens to any form of transportation, to forcing people to work for the collective. Read it and weep.

For those who think…

For your reading pleasure !!

Glenn Beck's I WILL NOT COMPLY monologue...

I think Glenn was a bit ticked off last night !!! I watched most of it, very moving. Enough is enough. I will peacefully not comply.

We have made this liberal IQ test mostly a multiple choice or connecting test to make it as easy as possible for them to pass.  Of course, we are still betting most liberals will flunk this test - even if in some cases, there are multiple correct answers of which any are fine. 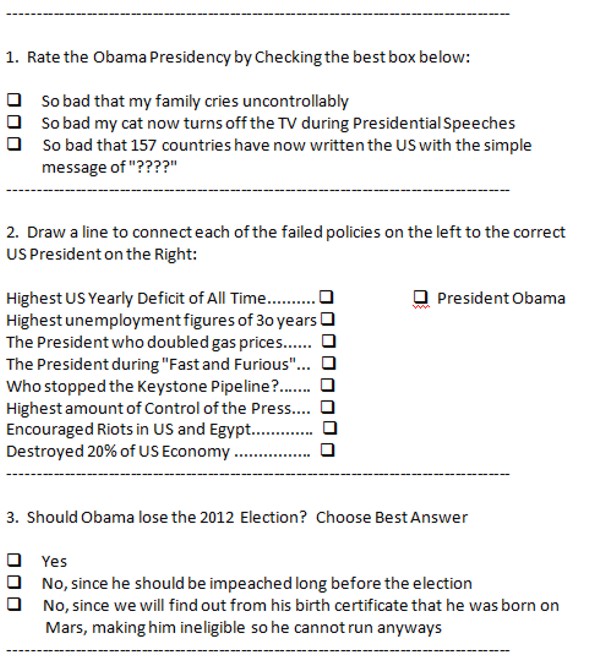 NewsFlash:  Eric Holder has decided that liberals can flunk…

Here is the latest letter sent to Holder by the judiciary comittee:

Smith and Grassley to DOJ and DHS: Ninth Circuit Ignores Rule of Law

We of course needed to change the name in order to preserve her privacy and secrecy.  You can ask, but we will never ever give out this person's real name.  But recently we examined some historical photographs that were very badly Photoshop-altered to see if we could find Ms. Fluker's earlier life.  And yes ..... we did. You thought you knew Napoleon?  Hah! … 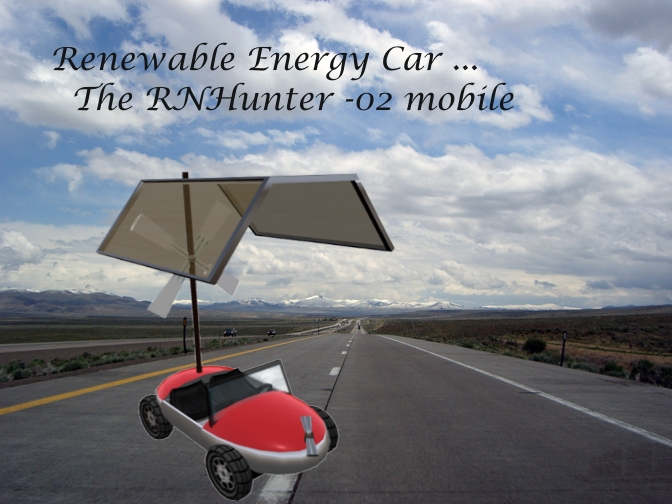 And here we have the first truly renewable energy car - the RNHunter -02 Mobile. ... Sleek....Amazing. ... Pretty... Stupid... in fact, really amazingly pretty stupid.   It as you see mixes wind energy while you are driving (clever eh?) with solar power, with a wind up key in the front.  Missing from view is the pedal power the driver and the passenger have.  Also…

I guess I've become the 'rabblerouser' in my hometown...really, showing my age here.  You don't hear rabblerouser much anymore.

Well....I believe AG21 has come to my neighborhood.  I may be wrong, but I don't think so.   I am a little bit smarter than I look.

For quite awhile, my friends have urged me run for "something".  They think I'm "in tune" and "informed", but I tell them I'm just the barking dog.

Think about having your windows open on a nice night.  It's…

What? The Media Lied to Us? A reminder of what we are fighting for

They Called it America - by Rabbi Abba Hillel Silver
God built him a continent of glory, and filled it with treasures untold. He studded it with sweet-flowing fountains, and traced it with long-winding streams. He…

President Obama Sings "Nobody Loves You"

Found this and decided it was too good not to share:

The Politics of Hate

The Politics of Hate

I am writing this since I am now afraid that the politics of hate are far too high in this country.  I believe the first and only safety is to be an independent and mean it and also to be very, very cautious of the nonsense coming over the TV from both the politicians and the commentators.    In my case, the only thing I really believe are what I call the basics:  Math, logic, morality, and valid history.

While some of Saturday Night…

Our struggling students,,, I hope this is not where our future is.

I could think of about 50 questions for this young lady, I wonder how many of her participation trophies her parents have on their mantlepiece. Simply amazing that someone in this country who is getting an education paid for by private donations via scholarship and receives health care provided by that institution can sit there with a straight face and claim that she is being discriminated against for not getting her birth control of her choice for free.

The Changing Face of the Senate

Old friend Chris Dodd is not running for re-election.  Surely he knows something we do not.  No way he does not run unless he is positive of a Republican victory.  This man has escaped a half dozen of the most impeachable offenses ever to become known in this country's history.  How ?  From taking 5,000 checks from Buddhist monks as co-chair of the DNC in '96,  to waitress sandwiches with Teddy Chappaquiddick to the Banking scandels.  His fingerprints are all over everything Freddie and…

Great letter, I wish I would hear some of this from the Republican candidates !!!

The Shame of the Puppet Masters

The Shame of the Puppet Masters

As we see things wrong in the US, we often ask who is responsible for this mess?  I will admit that I too was confused on many items.  But then I began to see that it is really not that complex.  Washington DC are the puppet masters.  Their thousands of laws determine how we work together, what wars we go into, how we fight them, whether or not the US is a good place to do business in, and more.  Everyone else to an extent are puppets.  Whether…

$100,000 Testla Roadster turns into a BRICK if left unplugged:

Thank you friends, for being part of Fundamental Refounding! May we all leave a positive mark along our pathway through life!