Obama's America: 50 and 60-Years-Olds Moving in With Parents to Survive the Economy 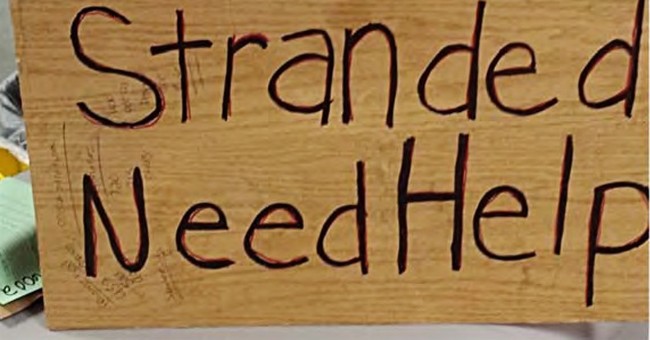 Welcome to Obama's America, a place where 50 and 60-year-olds are moving back in with their parents in order to survive terrible, ongoing economic conditions. From the NYT:

Debbie Rohr lives with her husband and twin teenage sons in a well-tended three-bedroom home in Salinas.

The ranch-style house has a spacious kitchen that looks out on a yard filled with rosebushes. It's a modest but comfortable house, the type that Rohr, 52, pictured for herself at this stage of life.

She just never imagined that it would be her childhood home, a return to a bedroom where she once hung posters of Olivia Newton-John and curled up with her beloved Mrs. Beasley doll.

Driven by economic necessity — Rohr has been chronically unemployed and her husband lost his job last year — she moved her family back home with her 77-year-old mother.

At a time when the still sluggish economy has sent a flood of jobless young adults back home, older people are quietly moving in with their parents at twice the rate of their younger counterparts.

For seven years through 2012, the number of Californians aged 50 to 64 who live in their parents' homes swelled 67.6% to about 194,000, according to the UCLA Center for Health Policy Research and the Insight Center for Community Economic Development.

Is this really what the American dream has come to? Adults moving back in to care for elderly and aging parents who need care is one thing, this is quite another. The unemployment rate of 6.7 percent is bogus. Millions are out of work, 47 million people are on food stamps (imagine how that picture if people still had to line up in bread lines) and the White House, along with Nancy Pelosi, is telling people they don't have to work because they can "be an artist," or "avoid job lock" thanks to Obamacare.

All that being said, the millennial generation (my generation) has a pretty bad reputation, but this latest news makes the baby boomer generation look way worse.

I actually know some people in their 50s who have done just that.  I think it is only in part because of the economy.  I am in my 50s, and most I know in that age and a decade older would go back home before taking a handout from the government.  'Welfare' and 'food stamps' and 'Medicaid' had negative connotations when I was growing up.  I'm healthy enough to get a job, and no job is too menial.  Sadly, the generation after mine seems far more content to live with constant help from the government.

Perhaps this is not all bad.  MAYBE moving back home will help revitalize the atomic family and our core values will once again grow stronger.

True JB.  But 60 year olds (not sure that is a word) moving back with their 80 year old parents?  I find that amazing.

My experience as part of NATO in Germany, was that West Germans purchased housing not with a 30-year mortgage as much as a commitment of the family to complete the purchase -- even, sometimes, by the next generation.

Understood JB, but this (your example) isn't even remotely close to being the same. You must admit that?

It is mostly an observation and you are correct that there is really only a vague parallel.

However, remember how Obama was cheered by the Europeans when he visited after his initial election.  The EU is largely socialist.  Obama is largely socialist.  Obama has promised that everything in the US will get more expensive due to skyrocketing energy costs.  See the loss of jobs in the economy.  Where do you want your children to live? -- at home or under a bridge.  Options are reduced.  Freedoms are lost or delayed and the European model of society comes to America.  We must now move back home before we are able to leave and support ourselves once again.  No wonder children can stay on their parents' health care plan until age 27.  They probably can't leave home so easily as they have been able before.

As things are going here JB, if and when I'm 80, my 50+ year old son won't want to move in with me because I'll be living under a bridge.

Obamas America! He'll have us all living in huts like his uncle soon enough!

Wow amazing isn't it? but I think that according to the gvmt, they are actually doing it to pursue a life of art... or maybe acting lessons and everyone is much happier now. Good thing there is no inflation too. I pray for my kid and hers too. I sure hope we can find a way out of this mess.

So then, Joe Biden is moving back with his parents?

I do not have this option sadly.