Obama appoints Bidden's Campaign lawyer as Ebloa Czar- NOT A DOCTOR A LAWYER! What is he suppose to protect the government against legal problems.

More when I can get updates

I haven't seen this story comfirmed anywhere but on The Glenn Beck Show, but FOX is saying a Czar was named.

Ronald A. "Ron" Klain is an American lawyer and political operative best known for serving as Chief of Staff to two Vice Presidents - Al Gore (1995–1999) and Joseph Biden (2009–2011).[1][2] He is an influential Democratic Party insider. Earlier in his career, he was a law clerk for Supreme Court Justice Byron White during the Court's 1987 and 1988 Terms and worked on Capitol Hill, where he was Chief Counsel to the Senate Judiciary Committee during the Clarence Thomas Supreme Court nomination. He was portrayed by Kevin Spacey in the HBO film Recount depicting the tumult of the 2000 presidential election. On October 17, 2014, CNBC reported that Klain is to be named the newly created "Ebola czar" by President Obama.

Are you ready for another left-wing lackey which doesn't know his a$$ from 3rd base?

I think he also worked for our friend Al Gore.

I feel safer already... not.

Permalink Reply by Jerseygal on October 17, 2014 at 1:49pm
More proof that Obama is not taking this seriously. What was wrong with Dr. Ben Carson? He may not be an Ebola expert, but he IS a doctor, and has excellent communication skills.

Agreed JG. Or he is taking this seriously, and this is just one more step to destroy the great Satan.

First of all, it is hard for me to call anything Obama does a plan, but this is what I think he is doing:

* He just appointed an Ebola czar with no medical experience or background but is great at politics as having been deep into White House previous affairs. Therefore he will be good at finding words to spin
* Even though Americans near Dallas who could be infected are being stopped from flying, especially after a nurse flew on Frontier and really upset that airline, West Africa people can fly in anytime.
* Our checks of people at airports it would seem have not have caught either the first Ebola liar from Africa nor the nurse since likely their temperatures were too low. The nurse was 99.5 F when traveling, and I think the CDC was looking for 100.4 - or something - but do not worry - the CDC knows everything
* Our border will remain wide open where we already know we have people with TB and other diseases going around the country, as well as drug cartels and MS-13 gang members
* 3000 or 4000 American soldiers will go to West Africa where it would be hard to believe that none get infected
* Obama now wants the National Guard to leave their jobs and their families and go to West Africa to build hospitals and also perhaps to get infected
* Other Nations? Recall that every time an Obama carrier pigeon speaks, they talk about the 60 nation coalition that is helping to defeat Isis. One of the key ones, Turkey, just parks its tanks at the Turkey Syria border and watches Isis kill Kurds in the adjoining city of Kobani. Well, Turkey is still mad at Kurds, so their NATO card and $3.00 might get them a coffee at Istanbul Starbucks. It would seem to anyone with a brain that two serious nations could wipe out a large marauding group that really is not even a country - yet. That means, there are not 2 serious nations, much less 60. But Obama does not even seem to ask this fantasy coalition for help on world health.

Even a broken stopped clock on Military time is right once a day. While it is wrong for me to consider motives, I already know from some liberals that I talk to that they hate the Military. And so the Military is greatly reduced and then sent to Ebola land. Odd. They are not doctors. And I just heard from someone but did not verify that in Obama's book "Audacity of Hope" I believe he said that if push came to shove, he would sign with the Muslims, good Christian lad that he is. I am ... not surprised. His actions are 100% Muslim and he continues to show his hatred for the US. If this was not so serious, one could perhaps laugh that Americans voted in a Black racist Muslim extremist just 7 years after 9/11. But somehow, today, that just does not seem funny.

For whatever reason, his actions are so incompetent that to me, they look like treason. Oh and did I forget to add? The Military that are left who are not allowed to fight Isis, but allowed to get Ebola, are also being commissioned to fight Global Warming - even though many tell me that the earth's temperatures have been stable, not rising, for now over 18 years. That would seem to mean "The Globe is not warming." But the Obama destruction of the "Great Satan" .. is warming.

RN you hit the Nail, in the coffin of America, on the head! This President HATES America  and is out to destroy us.

I said when I first came to this site that there would be no 2016 Presidential Election. With Ebola, & Illegal Immigration,whatever else is probably coming down the road I can clearly see Obama declaring a National State of Emergency and canceling all elections "For the good of the country".

The "Ebola Czar" is just another in a long line of butt kissing political hack YES MEN.

Why would ANYONE hire/appoint a former adviser to Joe Biden (not to mention Al Gore)?

This guy would be unemployable in the private sector!

(Although you can say that about most of the people in D.C.)

This man he appointed is the hanging chad dude from the Florida recount for Al Gore! 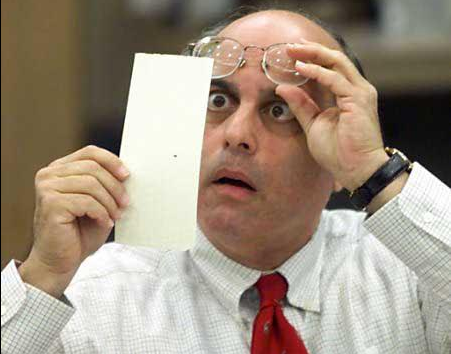