Mueller's Report Ends 'WitchHunt' But What's About To Unfold Is The Real Story - Sara A. Carter “What will unfold is investigation historians will consider one of the greatest political ‘witch-hunts’

Attorney General William Barr stressed Thursday during his press conference that although Special counsel Robert Mueller detailed 10 “episodes” involving actions by President Trump that might have constituted obstruction of justice, neither the DOJ, nor Deputy Attorney General Rod Rosenstein believed those actions violated the law.

Barr said based on the evidence that Trump’s action had “non-corrupt motives.” The redacted version of Mueller’s report was released late Thursday. The very few redactions in the behemoth report show the reasons for the decisions, which were based on recommendations made by the intelligence community, DOJ and Mueller prosecutors to protect classified information, sources and methods and information pertaining to ongoing litigation.

WHAT WILL UNFOLD IS AN INVESTIGATION INTO WHAT HISTORIANS WILL CONSIDER ONE OF THE GREATEST POLITICAL ‘WITCH-HUNTS’ IN U.S. HISTORY. IF JUSTICE IS SERVED, THOSE RESPONSIBLE WILL BE OUTED AND PROSECUTED.

The roughly 400 page report is what it is and now it is available for the public. After more than two years and national media consumption of every rumor possible the investigation has concluded that neither President Trump, anyone on his campaign and no American colluded with Russia to influence the 2016 election.

Thank goodness. We should be celebrating. Instead, many media outlets who carried the Trump conspiracy water to thirsty ‘anti-Trumpers’ and angry Democrats are scouring the pages looking for anything to salvage their failed attempts at removing a duly elected president.

The reality, however, is that it’s over for those pushing the now debunked Trump Russia collusion. It is a chapter closed.

What is left, however, are multiple chapters still left to be written. What will unfold is investigation into what historians will consider one of the greatest political ‘witch-hunts’ in U.S. history. If justice is served, those responsible will be outed and prosecuted.
Those officials who weaponized the intelligence community, approved unauthorized surveillance on American citizens based on unvalidated information and targeted a sitting president should fear the wrath of ‘lady justice.’

We also witnessed two major disinformation campaigns: one by the Russians and the other by supporters loyal to Clinton.

From the beginning it was impossible to prove the allegations that the Democrats, anti-Trump right wing and others were lobbing at the president. They did it with such voraciousness that it took over the airwaves like a Tsunami, sweeping up everything and everyone in its path.
Journalists that couldn’t prove those allegations were true, like me, simply said over the past two years “there is no evidence that Trump colluded or conspired with Russia.” I’ve said this as far back as 2017.

It is the same end result discovered by Mueller after more than $30 million dollars, witness interviews, subpoenas and hundreds of warrants.

Days and weeks with little sleep were spent chasing rabbits down a proverbial hole of allegations that amounted to nothing. It was literally exhausting.

Instead, what evolved from my investigations, as well as my colleague John Solomon, was growing body of evidence of malfeasance within the intelligence community, FBI and DOJ. The insurmountable evidence unraveled like a loose ball of yarn as we started pulling threads and avalanched with the launch of Congressional investigations.

Rep. Devin Nunes, R-CA, was one of the first to reveal those threads and never wavered even when the Washington ‘swamp monsters’ targeted him and his credibility. Rep. Jim Jordan, R-Ohio and Rep. Mark Meadows, R-NC, worked tirelessly with their committees to get to the truth. Sen. Chuck Grassley, R-Iowa and Sen. Lindsey Graham, R-SC, have done the same and all promise to continue to the battle for the truth. Why? Because frankly this political war is not over.

Just remember, it was Hillary Clinton and the DNC that paid for former British Spy Christopher Steele’s anti-Trump dossier through their attorney’s Perkins Coie. It was the embattled research firm Fusion GPS, with its founder Glenn Simpson, that helped spread the dossier and its unsubstantiated and false findings all over Washington D.C. They did so with help from senior officials at the FBI and DOJ. When Simpson and his crew couldn’t get it published they used their contacts at the FBI to leak to information to the media with them. They also had their anti-Trump friends in high positions of power within the Obama Administration like then CIA Director John Brennan, Director of National Intelligence James Clapper, FBI Director James Comey and his then Deputy Director fo the FBI Andrew McCabe to brief the most salacious parts of the dossier to Trump in January, 2017.

It was the best way to get the disinformation out regarding the dossier to the world. All of the sudden, Trump was being cornered and isolated. More importantly, early on they targeted Lt. Gen. Michael Flynn. They knew they had to remove Flynn – remove him from Trump’s side. After all, “he knows where all the bodies are buried and he was sick and tired of the Obama administration’s lies to the American people,” said one former intelligence source who worked closely with Flynn.

Mueller’s report will keep the left busy the next few days. It lists, as Barr noted, ten possible circumstances that could appear to be obstruction but were not considered obstruction by the DOJ. Barr said Trump never broke any laws. 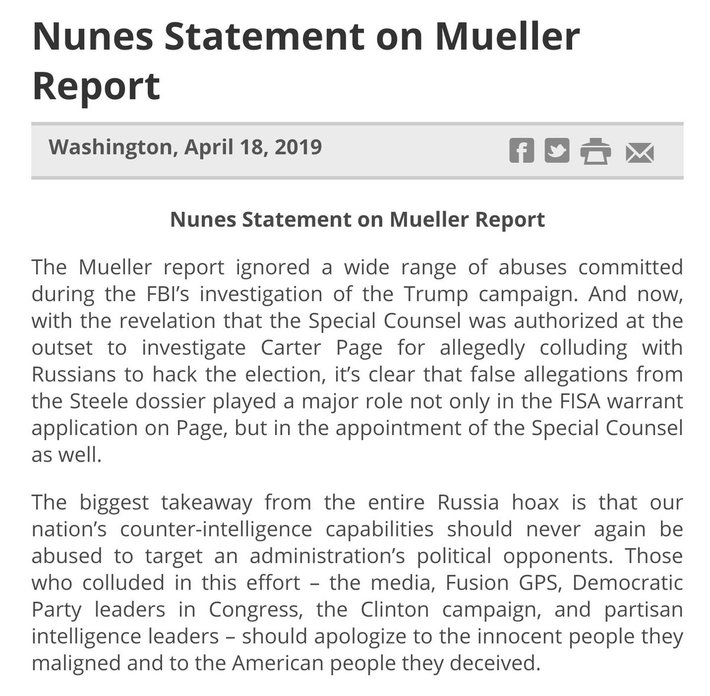 The Greatest Political Hoax of all time! Crimes were committed by Crooked, Dirty Cops and DNC/The Democrats. 4. No cooperation in espionage activities w any "Russia-linked persons"

White House Mueller probe was a waste of time and money – No collusion, no obstruction

With regards to Mueller's "report".

Mueller is "point man" for a coup d'état, and his current actions were quite predictable.  In particular, it was clear his report would end up slandering the President, and otherwise providing basis for House impeachment vote.

However, his criminal intent (coup d'état) cannot be perfected unless/until he offers sworn testimony to the House.  His problem now becomes that Republicans on the House committee will be asking their own questions about all of this, there will be an
Attorney General (Barr) to closely evaluate his answers, and the President has vowed to prevent Mueller's conduct, as per future Administrations.

It's been established the President intended to fire Mueller early on, and I fully agree he should have been.  Since he was not fired, it's likely he will end up wishing he had been, because now the President will have no choice but to skin him alive in the Courtroom.

As just one example of what Mueller will likely be required to speak about, under oath, will be the following consideration:

It's unlikely the Mueller report has ended the coup d'état---we're now to the point where Mueller goes for the kill (impeachment).  He knows at this juncture he must either stop the President, or he and his partners in crime have had it.

It will indeed be of historical proportion, as this whole sordid mess continues playing out.