McConnell abandons Obamacare 'repeal and replace' after GOP defections..Goes for Repeal Only!

It's about time and what they promised!

Senate Majority Leader Mitch McConnell late Monday announced he was abandoning efforts to pass a bill to "repeal and replace" Obamacare and said he would instead push a bill to fully repeal the law and give Congress two years to figure out a replacement.

He announced that major shift in strategy after GOP support for a repeal-and-replace strategy collapsed in the Senate.

McConnell, R-Ky., said he would take up a House health bill that passed the lower chamber in May, but with the first amendment being a 2015 repeal bill that gutted Obamacare.

"Regretfully, it is now apparent that the effort to repeal and immediately replace the failure of Obamacare will not be successful," he said in a statement.

Trump and leading conservatives in both houses of Congress had called for a clean Obamacare repeal bill after it became clear the Senate's latest attempt to partially repeal and replace former President Barack Obama's healthcare law did not have the votes to pass. Sens. Mike Lee, R-Utah, and Jerry Moran, R-Kan., were the two key defections.

Just before that announcement,President Trump tweeted out that the GOP "should just REPEAL failing Obamacare now & work on a new Healthcare Plan that will start from a clean slate. Dems will join in!" 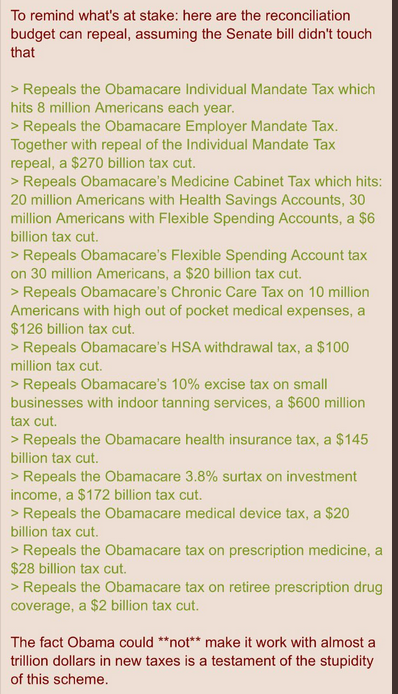 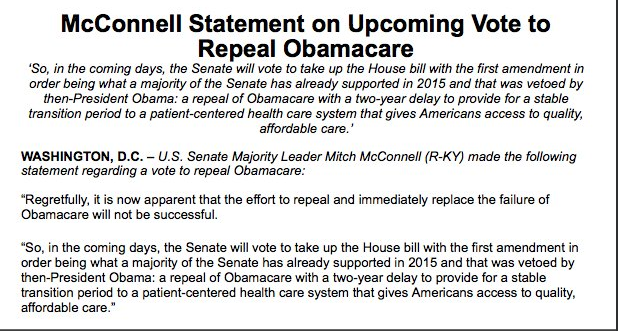 Yes! This bit of news gives me more hope. That is exactly what should have been done from the git-go.

When that Obamanation is repealed then I sincerely hope that the demented democrats will get on board and finally start doing the jobs they were elected to perform and help form a truly Bi-partisan bill that is solid and affordable for every single American,  regardless of Age, Income and Sex. One that we all can embrace!

And might I add, one, that every single Senator, Congress person and Federal employee will also have to abide by !

That is something we all must insist on! What is good for the people is perfectly good for the leadership as well! NO more special alternatives for any of them!

Nothing wrong with it" Trump:"I'll let it fail"

Dems:"He wants us to die!!" I thought you said it was fine?

The coronavirus lockdown is seemingly down and out, as many Democrats in charge of big cities --…See More
yesterday
0 Comments 0 Likes

Jodi180 replied to Jerseygal's discussion Your Mask Is Making You Meaner, Dumber, More Afraid & Less Safe
"This is a great article!  My sister-in-law made a mask for me at the onset (even though Fauci…"
Friday

Ruthann replied to Robin's discussion Sorry For My Absence.....
"I'm so sorry to hear about all the new problems. You and Rick can't seem to catch a…"
Friday

Robin replied to Robin's discussion President Trump: "Today, I am signing an Executive Order to protect and uphold the free speech and rights of the American people."
"Benny @bennyjohnson AG BARR: “These companies grew because they held themselves out as public…"
Thursday

Robin replied to Robin's discussion President Trump: "Today, I am signing an Executive Order to protect and uphold the free speech and rights of the American people."
"Sara A. Carter @SaraCarterDC WOW! The #ExecutiveOrder calls for social media companies engaged in…"
Thursday

Robin replied to Watchman's discussion Imagine you were born in 1900
"Great article and well written Watchman! Sending this out."
Thursday

Robin liked Watchman's discussion Imagine you were born in 1900
Thursday

Robin replied to Jerseygal's discussion Your Mask Is Making You Meaner, Dumber, More Afraid & Less Safe
"Good post! The masks are dangerous if you wear them for any length of time! You are breathing in…"
Thursday

**Note: I wrote this and managed to get it published on American Thinker. It borrows a lot from…See More
May 17
1 Comment 1 Like

Watchman replied to Jerseygal's discussion Your Mask Is Making You Meaner, Dumber, More Afraid & Less Safe
"I agree completely, masks have become a way to virtue signal how much better they are. A lot of…"
May 17