Lt. Col. Vindman, and twin brother Escorted out of White House.... Amb. Sondland was also fired by the administration

They messed with the wrong man! This is just the beginning! 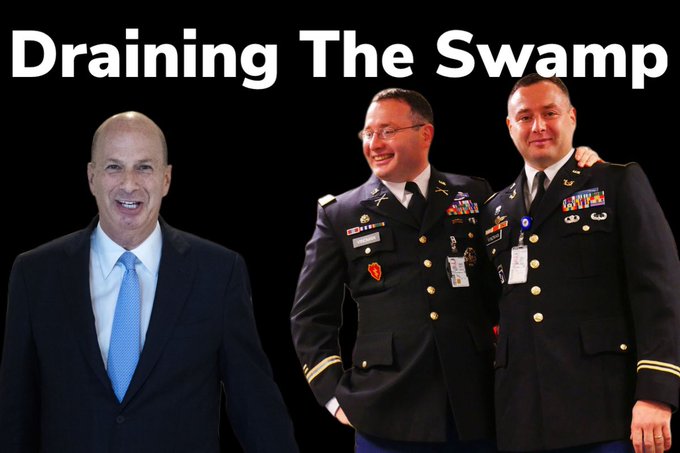 Vindman was pushed out of his role Friday months earlier than expected, according to a statement from his attorney. Vindman was not slated to leave until July, but had been telling colleagues in recent weeks he would likely leave soon.

Sondland said in a statement Friday that he is being recalled from his post.

“I was advised today that the President intends to recall me effective immediately as United States Ambassador to the European Union,” Sondland said.

“I am grateful to President Trump for having given me the opportunity to serve, to Secretary Pompeo for his consistent support, and to the exceptional and dedicated professionals at the U.S. Mission to the European Union. I am proud of our accomplishments. Our work here has been the highlight of my career.”

The dismissals appear to be retribution for Vindman and Sondland’s explosive testimonies to the House impeachment probe late last year.

Trump had continued to fume privately about Vindman’s testimony during the impeachment inquiry and foreshadowed his dismissal earlier Friday.

If President Trump had asked me one question prior to his moving into the People's House, I would have advised him with a single sentence.  Mr. President Elect, fire anyone and everyone hired or approved by President Obama, do it on your very first day!

I only wish he had asked me, and taken my advice.

Personally, I think he should have fired the Obama holdovers long ago.  When I think about it, though, I have to admit that Trump is far more strategic than most people realize.  Then I ask, what would the left (including the media) have done if Trump had dismissed all the Obama people on day one?  Impeachment (it’s their answer for everything). Then, what about Obama loyalists who may have been placed by Bush 43?  They’d be making their own trouble behind the scenes.  What about deep state converts to the anti-Trump camp?  There are those too, like Romney.   If I consider all that, I have to admit it might have been better to flush out some of them the way he did.

President Trump is making good on his promises to “drain the swamp” and cut Obama-era holdovers from his staffs, especially the critical and recently controversial National Security Council.

Officials confirmed that Trump and national security adviser Robert O’Brien have cut 70 positions inherited from former President Barack Obama, who had fattened the staff to 200.

Many were loaners from other agencies and have been sent back. Others left government work.

The NSC, which is the president’s personal staff, was rocked when a “whistleblower” leveled charges that led to Trump’s impeachment.

Last week, one key official who testified against Trump at a House hearing on the Ukraine affair that led to impeachment was sent packing. Lt. Col. Alexander Vindman was returned to the Pentagon. His twin brother, Lt. Col. Yevgeny Vindman, was also given the boot. Trump had expressed displeasure that Alexander Vindman had testified against him when the Ukraine specialist said he did not like the phone conversation between the president and a newly elected president of Ukraine.

Since entering the White House, Trump has relied on staffs smaller than previous administrations and has noted how prior presidents had a much smaller NSC team.

O’Brien recently said that former President George W. Bush handled the wars in Iraq and Afghanistan with 100 NSC aides, a model he is instituting.

“This month, we will complete the right-sizing goal Ambassador O’Brien outlined in October, and in fact, may exceed that target by drawing down even more positions,” John Ullyot, the NSC’s senior director for strategic communications, told Secrets.
https://www.washingtonexaminer.com/washington-secrets/bigger-than-v...

Duke replied to Watchman's discussion Where is everyone?
"The big "SCAM", it's all been a lie.  Please check out "Nuremberg…"
6 hours ago

It's been really quiet since the phony inauguration on Jan 20th. Where is everyone?See More
May 2
10 Comments 0 Likes