A federal appeals court on Tuesday struck down one of the pillars of ObamaCare, ruling that the law’s premium subsidies are invalid in more than two dozen states.

The D.C. Circuit Court of Appeals said the Affordable Care Act does not permit the IRS to distribute premium subsidies in the federal ObamaCare exchange, meaning those consumers must bear the full cost of their insurance.

The 2-1 decision by the three-judge panel in Halbig v. Burwell sets up a major legal showdown that conservatives believe could deal a fatal blow to President Obama’s healthcare law.


The government is expected to appeal the ruling to the full D.C. Circuit, but even if the administration triumphs there, the case appears destined for the Supreme Court.

The appeals court’s decision tossed out the ObamaCare subsidies on the grounds that the statutory language of the Affordable Care Act does not explicitly allow enrollees on the federal exchanges to receive premium tax credits.

"Because we conclude that the ACA unambiguously restricts the section 36B subsidy to insurance purchased on Exchanges 'established by the State,' we reverse the district court and vacate the IRS’s regulation," the court said.

Previous courts rejected that argument, saying Congress’s clear intent was to provide the subsidy help to everyone in the system.

The subsidies will still continue. 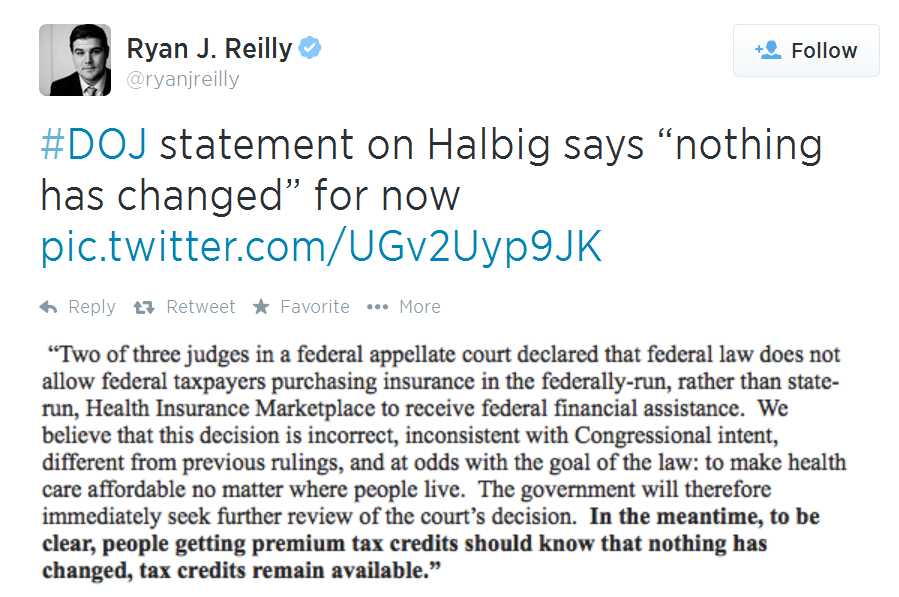 And who the hell is Ryan J. Reilly?

....." a D.C.-based reporter who covers the Justice Department and the Supreme Court for The Huffington Post" and " previously reporting for Talking Points Memo"

Well it appears that TPM is bashing the decision: 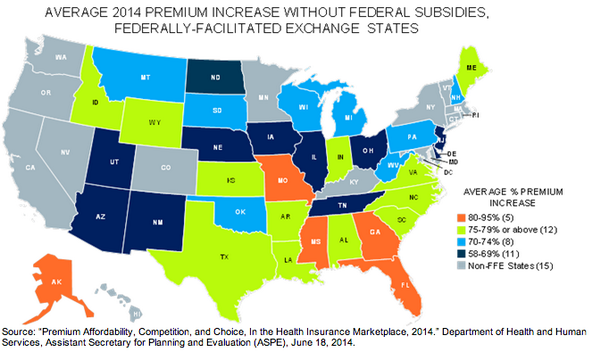 Via @CPearsonAvalere, a state-by-state look at how much premiums would shoot up if Halbig stands

Let's hope this ruling is a step in the right direction.

I sure hope it's the right direction.

If I'm understanding this right, then I think it's going to be a good thing.

Because then wouldn't this apply, on an equal-protection basis, everyone else needs to be freed from the same mandates.

The ACA is a law built of straw on a foundation of sand.  The ultimate outcome will be decades of litigation to fix the problems it has caused EVEN IF it is totally repealed.  Thank you Democrats for passing it before reading it and rationally debating its points so that all citizens could understand it -- even people in Congress.

JB:  My small biz policy was 'guaranteed' until 12/31/14.  According to my insurance guy...'your policy will now be reviewed in Sept.'

Hopefully the "review" date and the "guaranteed" date are different.  Hopefully the review is for the next covered period to allow them administrative processing time.

Each day, we find a new US law or constitutional issue that Obamacare breaks

Obamacare is a huge debacle that will still be causing major problems for the next decade or longer. About half the people in the country will continue to vote for all of those who passed it without reading it. Our biggest problem is not the politicians who want to destroy our constitutional form of government, but the huge mass of ignorant, uninformed people who support them. How can we ever undo 40 years of the U.S. Department of Education influence ?

Lock and load and no prisoners allowed

President Obama’s old Harvard Law professor, Laurence Tribe, said that he “wouldn’t bet the family farm” on Obamacare’s surviving the legal challenges to an IRS rule about who is eligible for subsidies that are currently working their way through the federal courts.

“I don’t have a crystal ball,” Tribe told the Fiscal Times. “But I wouldn’t bet the family farm on this coming out in a way that preserves Obamacare.”

The IRS issued a regulation expanding the pool of enrollees who qualify for the subsidies. Opponents of the law, such as the Cato Institute’s Michael Cannon and Jonathan Adler, argue that the IRS does not have the authority to make that change. (Halbig v. Burwell, one of the lawsuits making this argument, is currently pending before the D.C. Circuit Court; the loser will likely appeal the decision to the Supreme Court.)

“There are specific rules about when and how the IRS can deviate from the plain language of a statute,” Cannon explained to National Review Online, arguing that the subsidies regulation fails to comply with those rules.

Jodi180 replied to Jerseygal's discussion The feds are about to approve Covid shots for kids!
"Ask this:  It's only a matter of time before the 'vaccine' will be mandatory…"
1 hour ago

Duke replied to Jerseygal's discussion The feds are about to approve Covid shots for kids!
"No and HELL NO. Any attempt to give this poison to my grand children will result in a very negative…"
2 hours ago

Lawrence Brown replied to Jerseygal's discussion The feds are about to approve Covid shots for kids!
"How many kids will die because government injects poison in them? Government wants de-population…"
2 hours ago

Jerseygal replied to Jerseygal's discussion The feds are about to approve Covid shots for kids!
"I actually had someone tell me that vaccinating kids is necessary to ‘protect teachers’…"
3 hours ago

Jerseygal liked Jerseygal's discussion The feds are about to approve Covid shots for kids!
3 hours ago

I snagged this excerpt from Jodi’s Tids.  Horowitz: Where are the governors? Now the feds will…See More
3 hours ago
4 Comments 1 Like

kwicgov55 replied to Jerseygal's discussion P rotests Around the Nation Grow, as Americans Just Say 'No' to Government-Mandates of Vaccines
"I agree JG. I to know people that are vaccinated, and at least 2 of those people got covid, 1…"
20 hours ago

NativeCollector replied to NativeCollector's discussion Biden Says First Responders, Police Who Refuse Vaccine Mandates Should Be Fired
"True, Jodi…too many are too busy fighting nonsense wars as our country slips away, and they…"
23 hours ago

NativeCollector replied to NativeCollector's discussion Biden Says First Responders, Police Who Refuse Vaccine Mandates Should Be Fired
"What you say true, kwicgov55!  This should not be forced on anyone.  It makes me…"
23 hours ago