CNN on another planet

CNN on another planet

I would like to be for CNN.  At one time they held the keys to the world news and everyone called them the best.  Then they decided to only run stories they like and the last time I checked, they had some of the lowest ratings on cable news.  Fox News comes in first, then Jon Stewart and the Daily show and sometimes Colbert, and then near the bottom is CNN.

With the US embroiled in 4 major scandals and some minor ones, and N. Korea threatening to blow up our cities, Russia sending missiles to Syria while they smirk at John Kerry and the US, here was their headlines on the net today: 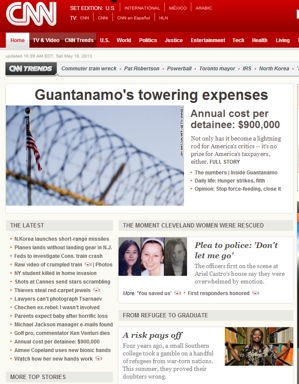 As we now know, Benghazi was a total lie to cover up four deaths and get Obama elected, and the IRS targeted conservative groups before the election to wound them and slow them down and help the Obama election.  This is in addition to Eric Holder spying on 20 phones in the AP, and Fast and Furious where an estimated 300 died and yet we are told the records are sealed.  And in addition there is the unfair EPA treatment who gives answers depending on what your party is when you ask, and the bugging of the white house cloakroom, and Sibelius breaking the constitution asking for donations to push Obamacare....

But on the front page is Gitmo (again) where I understand the average prisoner gains 20 pounds and has access to play station and a library in their language.  There was an article below this where someone said that the IRS using politics to determine how people are treated was not political.  No, of course not.  There was also an article on why dogs should not dress as pandas.

Am I anti CNN?  I wanted them to win.  I wanted them to have some common sense.  But like many news outlets, they have become political hacks covering for their favorite party.  I have no dog in this fight.  I do not belong to the Republican party, nor the Democratic Party, nor the Tea Party and I do not even go to every birthday party I am invited to.  But news should be news.  CNN often does not even give the subjects.

Great post, RN.  Many cable carriers used to only give Fox news with an upgraded package too, but CNN was in the base package.  I don't know if that is still true, but that shows some bias from that sector of media.   It is no wonder that today's generation is clueless.

Welcome to what is known as a disinformation campaign or a more proper nomenclature is PROPAGANDA.

ps. If you think this is bad the site aggregators on the main search engines will cause permanent brain damage.

Good one Dr. I find that not only truthful but also somewhat amusing this morning in a strange way. Yeah, if this is what liberals get called news, then one can see why they say silly things.

I was home sick last Tuesday....2 'working' days after the IRS scandal broke.  Top story on the Today Show?

If one watches, listens to or reads the current events from, NBC, ABC, CBS, CNN, MSNBC, and a host of other Liberal/Progressive news outlets, it doesn't long to realize that they do not report what the news actually is, but instead what they can make up to be news.

The fact is most Democrat voters don't watch any news and they have no idea what Liberalism/Progressivism/Communism is. They spend their 'quality time' with the family watching Dancing With Stars, name any type of professional sports.....you know the stuff......it requires NO thinking.

Once upon of time, I watched CNN. Not so now a days. I have even cut back on Fox news with pundits like Karl Rove, and others that have been playing as faux conservatives. Remember Rove has repeatedly insulted and attacked the tea party. I get my news from multiple sources, and this quote from Vladimir Lenin is exactly how I view the liberal media of today.

I'm with ya, kwic....on Fox and their BFF Rove.  That dude is almost, almost....as hard to watch as dear leader.

I know we're supposed to be careful where we get our news, but I'm finding the alternative news sites to be quite informative and ahead of the game.

Are the AN sites lying to us?  I don't know....the MSM seems to be lying to us quite often.

Jodi, we are careful where we get our news, so when we smell a rat, regardless of whether that rat is in the form of a fake conservative, or an out and out liberal, we are not fooled.

Unfortunately, to many people take what ever the MSM says is true, and they look no further. I trust individual bloggers to be more truthful than paid media. I still research, always looking for the truth, just as I know many of us here do.