FINALLY! The time has come for some justice!

The Inspector General will discuss the findings of his investigation into DOJ and FBI’s conduct during the Foreign Intelligence Surveillance Act (FISA) warrant process as it relates to the 2016 presidential election.

“I appreciate all the hard work by Mr. Horowitz and his team regarding the Carter Page FISA warrant application and the counterintelligence investigation of the Trump campaign.

“Mr. Horowitz will be appearing before the Senate Judiciary Committee on December 11, where he will deliver a detailed report of what he found regarding his investigation, along with recommendations as to how to make our judicial and investigative systems better.

“I look forward to hearing from him. He is a good man that has served our nation well.” 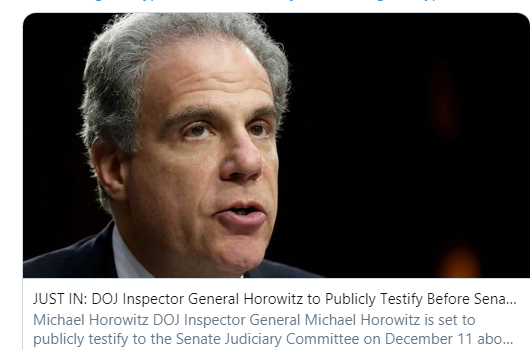 Lindsey Graham officially opens investigation into Joe Biden, his son, and their dealings in Ukraine

Sen. Lindsey Graham (R-S.C.) called on the State Department to provide documents related to the claims that Joe Biden abused the office of vice president in his relations with Ukraine during the Obama administration.

Ditch the fake news ==> Click here to get news you can trust sent right to your inbox. It's free!
Graham, the chairman of the Senate Judiciary Committee, made the request in a letter published on Thursday and tweeted about the probe.

The accusations center around suspicions that Biden used his position as vice president to withhold support from Ukraine until they fired a prosecutor that was looking into corruption at the energy company Burisma. That company had also hired Hunter Biden, prompting many to wonder if Biden was trying to help his son by abusing his office.

"Why would you wanna fire the guy after he prosecuted the person you said was the dirtiest person in all of Ukraine?" said Graham to Sean Hannity about the probe.

"I want to know are there any transcripts or readouts of the phone calls between the vice president and the president of the Ukraine in February, after the raid on the gas company president's house," he explained.

"After this raid, Hunter Biden kicks in, Hunter Biden's law business partner meets with John Kerry, and Vice President Biden on three occasions makes a phone call to the President of Ukraine, and goes over there in March, and they fire the guy!" Graham added.