Rules For Radicals at play! The left is losing at everything! They see their blue wave is turning into a Red Tsunami. Kavanaugh failed, the caravan is failing, the dems are falling in the polls against republicans and they will not take the house back. They are desperate! #FalseFlag

I totally agree with the below statement!

These "explosive packages" being sent to the #Media and high profile Democrats has Soros astro-turfing written all over it so the media can paint the #GOP as "the dangerous mob."

Explosive devices and suspicious packages have been sent to leading Democratic figures and CNN, officials said Wednesday — just days after a bomb was found in the mailbox of billionaire George Soros.

An explosive device was discovered early Wednesday at Hillary and Bill Clinton’s Chappaqua home, while another one addressed to former President Barack Obama was intercepted in Washington, DC, officials said.

And the Florida office of Congresswoman Debbie Wasserman Schultz was also evacuated due to a suspicious package, according to the Miami Herald.

Wasserman Schultz was listed as the return address on the package. It was originally sent to former US Attorney General Eric Holder’s, but bounced back to Wasserman Schultz due to a bad address, according to the paper.

Wasserman Schultz was also listed as the return address on the bombs sent to CNN and Soros’ house in Katonah, NY, law enforcement source told The Post.

The device found in the mailroom of the Time Warner Center at 10 Columbus Circle, was constructed with a pipe and wires, cops said.

Brennan, the name listed on the package, is a contributor to NBC News, but has appeared on CNN in the past.

The evacuation included offices for WarnerMedia and other Turner-owned properties like TNT, as well as a shopping mall and a Whole Foods store in the basement level, according to CNN

“This morning, New Castle PD assisted the FBI, Secret Service and the Westchester County Police with the investigation of a suspicious package. The matter is currently under federal investigation,” New Castle police, who cover Chappaqua, said in a statement.

In a statement, the Secret Service said “it has intercepted two suspicious packages addressed to Secret Service protectees,” identified as Hillary Clinton and Obama.

“The packages were immediately identified during routine mail screening procedures as potential explosive devices and were appropriately handled as such,” the Secret Service said.

“The protectees did not receive the packages nor were they at risk of receiving them,” it said.

I've been covering incivility for a while now. I'm not guessing or assuming anything on today's news (I have a gut feeling). It feels like this whole thing designed to create finger-pointing, the stir the pot and fan the flames. Its working.

Pic of one of the packages 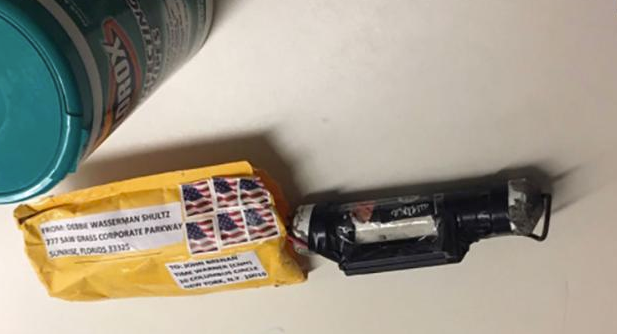 They were not delivered by the USPS.  It has insufficient postage.  The delivering person is on camera somewhere.  Just my random thoughts.....the perp is a leftist, and this starts the day after it’s revealed that Republicans are ahead in early voting in the battleground races, perp is trying to help the left win.

That sounds about right to me!

I knew that you would know! :)

They are now saying that the packages may have come thru a facility in FL.  They should have been culled out as having insufficient postage.  The CNN package was dropped off by a courier, according to Fox News.

Side note - boss (the one with a sense of humor) saw me on the computer, asks if I’m perfecting my bomb making techniques.  I never looked up, said that I don’t need to...if I make one, it works.

I still say these devices were meant to disrupt Republican enthusiasm.

Permalink Reply by Fundamental Refounding on October 27, 2018 at 8:43am

WATCH! Jack Posobiec recorded ‘MAGABOMBERS’ whole FB page before it was taken down

Can't get the link to work for me.

Permalink Reply by Fundamental Refounding on October 27, 2018 at 5:58pm

Federal agents are still searching for other possible suspects in South Florida who may have helped Cesar Sayoc, the former stripper and self-described entertainment promoter who was arrested at an auto parts store in Plantation Friday.

Friday night, FBI agents questioned a person at a Broward County residence with a potential connection to Sayoc, but nothing came of the interview, according to law enforcement sources familiar with the probe.
https://www.miamiherald.com/news/local/article220738650.html