Attack on US Embassy in Iraq.... The Pre-emptive Strike on Soleimani... Following Interactions!!

WASHINGTON (AP) — The attack on the US Embassy compound in Baghdad by Iran-supported militiamen Tuesday is a stark demonstration that Iran can still strike at American interests despite US President Donald Trump’s economic pressure campaign. Trump said Iran would be held “fully responsible” for the attack, but it was unclear whether that meant military retaliation.

“They will pay a very BIG PRICE! This is not a Warning, it is a Threat. Happy New Year!” Trump tweeted later in the afternoon. He also thanked top Iraqi government leaders for their “rapid response upon request.”

The breach of the compound, which prompted the US to send military reinforcements but caused no known US casualties or evacuations, also revealed growing strains between Washington and Baghdad, raising questions about the future of the US military mission there. The US has about 5,200 troops in Iraq, mainly to train Iraqi forces and help them combat Islamic State extremists.

Get The Times of Israel's Daily Edition by email and never miss our top stories FREE SIGN UP
The breach followed American airstrikes Sunday that killed 25 fighters of an Iran-backed militia in Iraq, the Kataeb Hezbollah. The US said those strikes were in retaliation for last week’s killing of an American contractor and the wounding of American and Iraqi troops in a rocket attack on an Iraqi military base that the US blamed on the militia. The American strikes angered the Iraqi government, which called them an unjustified violation of its sovereignty.

Trump blamed Iran for the embassy breach and called on Iraq to protect the diplomatic mission even as the US reinforced the compound with Marines from Kuwait.

Donald J. Trump
✔
@realDonaldTrump
· Dec 31, 2019
The U.S. Embassy in Iraq is, & has been for hours, SAFE! Many of our great Warfighters, together with the most lethal military equipment in the world, was immediately rushed to the site. Thank you to the President & Prime Minister of Iraq for their rapid response upon request....

Donald J. Trump
✔
@realDonaldTrump
....Iran will be held fully responsible for lives lost, or damage incurred, at any of our facilities. They will pay a very BIG PRICE! This is not a Warning, it is a Threat. Happy New Year!

96K
4:19 PM - Dec 31, 2019
Twitter Ads info and privacy
37K people are talking about this
“Iran killed an American contractor, wounding many,” he tweeted from his estate in Florida. “We strongly responded, and always will. Now Iran is orchestrating an attack on the US Embassy in Iraq. They will be held fully responsible. In addition, we expect Iraq to use its forces to protect the Embassy, and so notified!”

Even as Trump has argued for removing US troops from Mideast conflicts, he also has singled out Iran as a malign influence in the region. After withdrawing the US in 2018 from an international agreement that exchanged an easing of sanctions for curbs on Iran’s nuclear program, Trump ratcheted up sanctions.

Those economic penalties, including a virtual shut-off of Iranian oil exports, are aimed at forcing Iran to negotiate a broader nuclear deal. But critics say that pressure has pushed Iranian leaders into countering with a variety of military attacks in the Gulf.

Until Sunday’s US airstrikes, Trump had been measured in his response to Iranian provocations. In June, he abruptly called off US military strikes on Iranian targets in retaliation for the downing of an American drone.

Fighters of Kataeb Hezbollah, or Hezbollah Brigades militia, inspect the destruction at their headquarters in the aftermath of a US airstrike in Qaim, Iraq, Monday, December 30, 2019. (AP Photo)

Robert Ford, a retired US diplomat who served five years in Baghdad and then became ambassador in Syria, said Iran’s allies in the Iraqi parliament may be able to harness any surge in anger among Iraqis toward the United States to force US troops to leave the country. Ford said Trump miscalculated by approving Sunday’s airstrikes on Kataeb Hezbollah positions in Iraq and Syria — strikes that drew a public rebuke from the Iraqi government and seem to have triggered Tuesday’s embassy attack.

“The Americans fell into the Iranian trap,” Ford said, with airstrikes that turned some Iraqi anger toward the US and away from Iran and the increasingly unpopular Iranian-backed Shiite militias.

The tense situation in Baghdad appeared to upset Trump’s vacation routine in Florida, where he is spending the holidays.

Trump spent just under an hour at his private golf club in West Palm Beach before returning to his Mar-a-Lago resort in nearby Palm Beach. He had spent nearly six hours at his golf club on each of the previous two days. Trump spoke with Iraqi Prime Minister Adel Abdul-Mahdi and emphasized the need for Iraq to protect Americans and their facilities in the country, said White House spokesman Hogan Gidley.

Trump is under pressure from some in Congress to take a hard-line approach to Iranian aggression, which the United States says included an unprecedented drone and missile attack on the heart of Saudi Arabia’s oil industry in September. More recently, Iran-backed militias in Iraq have conducted numerous rocket attacks on bases hosting US forces.

Sen. Tom Cotton, an Arkansas Republican and supporter of Trump’s Iran policy, called the embassy breach “yet another reckless escalation” by Iran.

Tuesday’s attack was carried out by members of the Iran-supported Kataeb Hezbollah militia. Dozens of militiamen and their supporters smashed a main door to the compound and set fire to a reception area, but they did not enter the main buildings.

Sen. Bob Menendez of New Jersey, senior Democrat on the Senate Foreign Relations Committee, blamed Iran for the episode and faulted Trump for his “maximum pressure” campaign against Iran.

“The results so far have been more threats against international commerce, emboldened and more violent proxy attacks across the Middle East, and now, the death of an American citizen in Iraq,” Menendez said, referring to the rocket attack last week.

By early evening Tuesday, the mob had retreated from the compound but set up several tents outside for an intended sit-in. Dozens of yellow flags belonging to Iran-backed Shiite militias fluttered atop the reception area and were plastered along the embassy’s concrete wall along with anti-US graffiti. American Apache helicopters flew overhead and dropped flares over the area in what the U.S. military called a “show of force 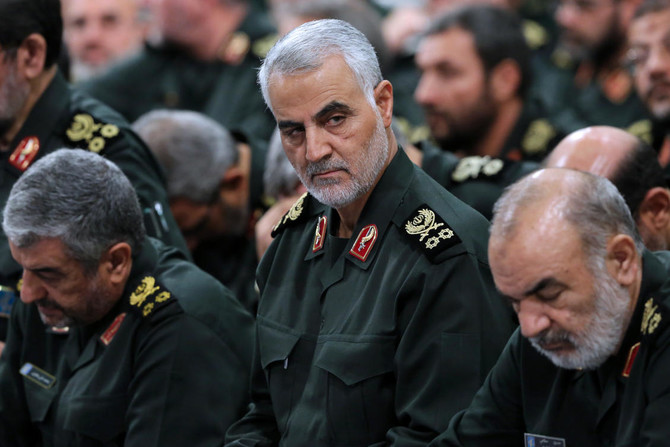 Just Outside Of Bagdad 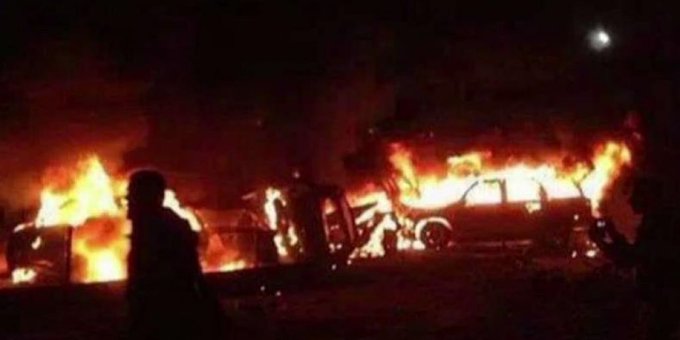 I am loving this!  Trump doesn’t mess around.  He will not let these terrorists get away attacking and threatening us or our interests!

Donald J. Trump
✔
@realDonaldTrump
· 24m
Replying to @realDonaldTrump
....hundreds of Iranian protesters. He was already attacking our Embassy, and preparing for additional hits in other locations. Iran has been nothing but problems for many years. Let this serve as a WARNING that if Iran strikes any Americans, or American assets, we have.....

Donald J. Trump
✔
@realDonaldTrump
....targeted 52 Iranian sites (representing the 52 American hostages taken by Iran many years ago), some at a very high level & important to Iran & the Iranian culture, and those targets, and Iran itself, WILL BE HIT VERY FAST AND VERY HARD. The USA wants no more threats!

BREAKING: At Least 2 Rockets Fired at US Balad Airbase in Iraq – 3 Soldiers Injured – 2 Missiles Strike Near US Embassy in Baghdad!

#BREAKING: At least 3 rockets strike Balad Airbase housing US troops north of Baghdad and 2 rockets strike near US Embassy in Baghdad in simultaneous attacks https://twitter.com/elintnews/status/1213507071934636032 …

Red Flag is hoisted on top of Masjid E Jimkaran.

Never before in the history of Iran has a red flag been hoisted on this most significant mosque in Iran.

Things are getting UGLY folks!

US Navy cancels joint exercises in Morocco, redeploys troops to the Middle East

Sailors and Marines stand on the deck of the USS Bataan (LHD 5) as it arrives into Pier 88 during the "Parade of Ships" ceremony to kick off Fleet Week in New York. (File photo: AFP)
Ismaeel Naar, Al Arabiya EnglishSaturday, 4 January 2020 Text size A A A

A US Navy ship carrying thousands of Marines will skip a scheduled training exercise in Morocco and is making its way closer to the Middle East amid heightened tensions in the region, according to USNI News.

The US Bataan carrying an estimate of 2,200 Marines aboard are now making its way to the Middle East after revising plans to conduct joint training exercises with the Moroccan military, according to the media division of the United States Naval Institute.

The decision comes just a day after the United States confirmed it was sending nearly 3,000 additional troops to the Middle East from the 82nd Airborne Division as a precaution amid rising threats to American forces in the region.

Iran promised vengeance after a US airstrike in Baghdad on Friday killed Qassem Soleimani, Tehran’s most prominent military commander and the architect of its growing influence in the Middle East.

A senior military official in Iran threatened an attack on some 35 “American targets,” including “destroyers and warships” near the Persian Gulf Friday night, promising to seek revenge for the killing of Gen. Qassem Soleimani, according to a report.

The latest threat against the U.S. came late Friday night from senior Revolutionary Guards commander Gen. Gholamali Abuhamzeh, a day after top Iranian military general Soleimani was wiped out by an airstrike at Baghdad International Airport.

Abuhamzeh, commander of the Revolutionary Guards in the southern province of Kerman, foreshadowed a possible attack on “vital American targets” located in the Strait of Hormuz in retaliation of Soleimani’s death.
https://www.foxnews.com/world/iran-revolutionary-guard-commander-at...

As a diplomat, I believe there isn’t enough media attention on the fact that General Soleimani was planning to attack US diplomats.

@realDonaldTrump caught Soleimani in the act. And saved lives by stopping him.