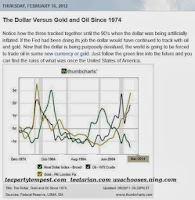 Recently I was looking at inflation rates and reading what some progressives had to say on economics. I knew inflation rates were low and in part that was due to cheap imports. Imports alone couldn't account for $4 trillion in Quantitative Easing inflation dollars. For the past few days I've been looking for these answers and here are my conclusions.

The US government has been attempting to practice Keynesian economics. The basic principle of John Keynes economics is that the government pumps money into the economy. That money can come from either borrowing or printing. In the age of computers that money can be created through digital information. It's not important how the Fed got the money for QE. What's important is what happens to all that money.

Right now the Fed is sitting on $4 trillion in bonds accumulated over almost five years of Quantitative Easing. It's hard to determine what the value of those bonds will be at the time they are sold. The eventual problem will be how to inject that money back into the economy without causing hyper inflation. The Fed could simply hand over that money to the US Treasury and placed into the general fund. The Fed banks could simply keep the money and pay the US government their 6% interest as determined by the Federal Reserve Act.

Now we must look at normal banks. They have been receiving the benefits of all this bond buying and have kept their interest rates slightly lower than they might have been otherwise. Banks have also benefited from the usual borrowing from the fed at less than 1% interest. In a normal reality banks would in turn loan that money to people like me and you, as well in the form of  home mortgage and business loans.

The central government has been practicing Keynesian economics from the top down and not the bottom up. To properly inject money into the economy it must be put in the hands of average Americans, not banks. As much as we cringe at hearing the term infrastructure building from the left, it does inject money into the economy by creating jobs done by average Americans. We can debate if infrastructure building is the best way to stimulate the economy another time. What we do know – this isn't what the government has been doing.

We have watched protesters, particularly Occupy Wall street, fill streets complaining about cronyism. They will debate until they are blue in the face that supply-side economics doesn't work. Yet those same people have been supporting a government that's participating in extreme cronyism by using a mangled form of supply-side. They have created a system in which it's better to hold money than to let it flow into the economy – a system that keeps money in the hands of the rich and powerful.

There is at least $3 trillion dollars kept in offshore corporate accounts. It will remain there as long as the USA has the highest corporate tax in the world. The counter argument to this is that corporations get huge tax breaks. The truth is only the favored get those huge tax breaks and often in the form of subsidies. We have a government that has been picking and choosing winners and losers through subsidies.

I have just shown $7 trillion plus is held by government, and another trillion dollars being held by corporations in American banks out of fear, both are purposely being kept out of the American economy by government. Progressives constantly talk about the growing divided between rich and poor. They preach to us about cronyism. If there is a divide it's because of a progressive government's economic policies, and not the results of a free market.

We have two possible scenarios. In one government can release that money all at once back into the economy. This would lead to hyperinflation opening an opportunity for a coup d'Etat. It could be allowed to trickle back into the economy that would give a huge economic boost and allow for an electoral take over. For good or bad this is a dangerous economic practice. We know for sure government does nothing by accident, there's always a plan.