My husband Rick was diagnosed with Non Hodgkins Lymphoma a few years ago. He is stage 3 and his type of Lymphoma can't be cured! With that being said, and even with great insurance, we are seeing the effects of the healthcare law that was passed.

I have never before had anything denied, ever! Rick has been denied having a PET scan, which is the scan needed for a person with Lymphoma to see how many lymph nodes have the cancer in them. We have over 600 lymph nodes in our body. The lymph system is our immune system, for those that don't know that.

We were shocked that a test needed by the cancer doctor to assess Rick's cancer progression was denied. The doctor then had to write things a different way with different wording to eventually get the latest PET scan approved. Rick has had about 6 PET scans to date. I can see this will be a problem from now on with the scans because he is terminal.

I have to note that this Pain Management doctor has now PUSHED to put Rick on Medical Marijuana! Twice! I told him that I don't want that shit in my house, and to write his medications he needs.

Why is this doctor pushing Pot? My take is that;   1. The governemnt wants them to do this, because they will get the tax revenue from it. 2. The drug companies won't get the money from the sales of prescriptions and 3. Because I have a small co-pay for any prescription, the insurance companies won't have to pay the majority of the cost of his prescriptions.

Needless to say, I am angry! Very!!!  Rick has had trouble with high anxiety ever since he was diagnosed with Lymphoma. Who wouldn't? So now, because the doctors are scared to death, they are increasing his anxiety by turning him into a medical hot potato!

Is this the America that we knew? Is THIS what it is all coming to? Are we just that expendable? My answer is, YES! If you are terminal or are seriously ill, you should just die already!  Or, at least that is how the ruling class feels about the rest of us!

Robin, in spite of the trials you and Rick are experiencing, you have provided a very lucid and objective description of what you are going through.  I hope for both of you that the crushing bureaucratic leviathan relents and gives you some peace.

Wow, Robin....so sorry to hear about these UNNECESSARY struggles that you and Rick are having.

It's truly, and literally, 'sickening' what our government is doing to us.

Prayers are with you both, my friend.  Going to add to tids because folks need to know what's coming.

Robin , My prayers are for you and Rick .

Members of my family have had cancer including myself and it's a tough road to hoe and I thank you for your story as hard as it is to tell it and hard for us to see it .

It must be told and told again so others have an idea of what they may be in for.

We are able to give billions to other countries and illegals but not for our own citizens , absurd !

Thank you JB, Jodi and Dennis, for all your kind words! It means a lot!  Like Rick said, of all times for him to get cancer, it would have to be when we get someone like Obama and his administration in power! Rick used to be as engaged as I am with all of this that is going on. Once Obama was elected again it really took the wind out of his sails! He said that his reelection just signed his death warrant! The "death panel" is real. I am seeing it more and more. Now worries folks, I am tough and I am a fighter! I am also a realist. I take one day at a time!

What a run-around, Robin!  Nobody should have to go thru this crap, and I'm really sorry that you and Rick are caught up in it.  You are both in my prayers!  God bless.

Robin, I'm praying for you and Rick.

Just got this: MEDICARE AT AGE 76. Your hospital Medicare admittance has just changed under Obama Care.You must be admitted to a hospital by your primary Physician in order for Medicare to pay for it! If you are admitted by an emergency room doctor it is treated as  outpatient care where hospital costs are not covered. This is only the tip of the iceberg for Obama Care.

Just wait to see what happens in this year and 2014!  At age 76 when you most need it most, you are not eligible for cancer treatment * see page 272.

Robin, sorry about what you are going through.  Sorry Rick is ill.  It seems that Obamacare does work, unless you are ill.  As for the government watching everything, is that the same government who killed more than 300 people in Fast and Furious and then covered it up?  Is that the same government who killed 1000 people or so, war veterans, in the VA and then got bonuses and now want more money?  The problem with dictatorships, is that often they are most stupid and evil and least working people around.

Sorry about your issues Robin.  I wish the best for you and your family.

Robin, so sorry that you and your husband are having to go through this! There is no doubt that "badger" that you are, you have got Ricks back. Know Robin, that we have yours!

I will keep you and Rick in my prayers.

Yes, we all will be going through this eventually if we become ill. It is quite upsetting! I only hope and pray that we can get rid of this monstrous nightmare!

Thank you all so much for all of your prayers and wishes! 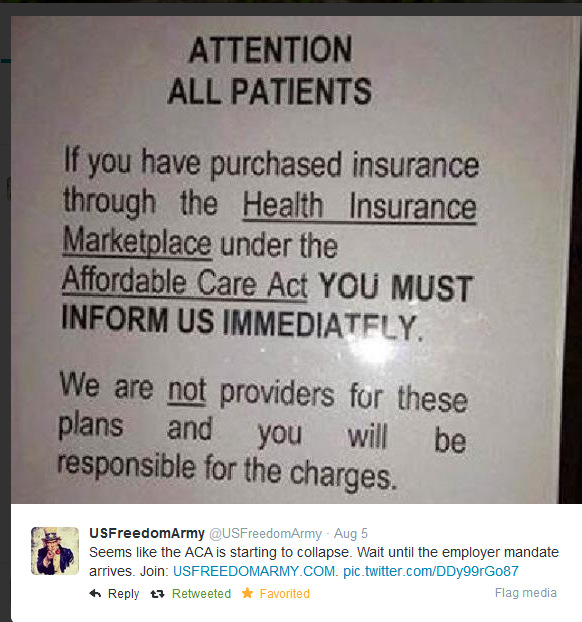