OK, I have been trying for the last few days to get this going, for some reason (might be the keyboard operator) I was not able to get my posts uploaded. frustrating... and I apologize for the fractured start-up of this Discussion Page. The others that got dumped were much better !! The Q phenomena has been on-going now for almost a year and a half, I first heard about Q last April an began doing some research. Initially I was skeptical, very skeptical, but have come to believe that the "Q Team" is part of the Military Intelligence Command structure,probably DIA (I could be wrong).
Please try to keep an open mind because it does appear that justice is about start. My best guess is it will start in the next few weeks starting with the release of the next DOJ Office of Inspector General (OIG) report which may even list recommendations for indictments/arrests. Then, again my best guess, the redacted pages from the Carter Page FISA application will be released exposing DOJ/FBI efforts to spy on and then oust POTUS using the crazy Steele Dossier. Some of this was exposed on McCabe's interview on 60 Minutes this last Sunday evening. Once these two events take place all hell is going to break loose.
Other sources that are chasing these stories are Sara Carter -https://saraacarter.com/ and John Solomon - https://thehill.com/hilltv/rising/419901-fbi-email-chain-may-provid...  ,,,,these guys are doing actual journalistic work and are both frequent guests on Hannity
2839
Q!!mG7VJxZNCI20 Feb 2019 - 4:15:39 PM
Mueller must deliver report to DOJ prior to OIG releasing next installment.
You will understand why in the coming weeks.
Q

AVALANCE John Solomon: Justice Department may DECLASS a tranche of documents before the public gets a chance to see the DOJ inspector general's report on alleged government FISA surveillance abuses

The Justice Department may release a tranche of documents before the public gets a chance to see the DOJ inspector general's report on alleged government surveillance abuses.

The Hill's John Solomon told Fox News host Sean Hannity on Thursday his sources are telling him that "important" records could be released sometime this month.

"To get how bad the situation is, you need those documents to be declassified," the investigative reporter said. "We've been talking about those buckets for a long time. I am hearing that the Justice Department is nearing a decision to release 10 or 12 of the most important documents before the ... IG report comes out, that will allow all of us to see how bad it was before we see the IG's conclusions. I think that could happen later this month."

Once again Judicial Watch is doing the heavy lifting.

The DOJ records show Rosenstein was working to make sure the media would have “difficulty” finding anyone in the DOJ to comment on reports he was plotting to remove Trump from office and a coordinated effort by the DOJ to spin the reports as “inaccurate” and “factually incorrect.”

The records also show that the DOJ was working to characterize Rosenstein’s offer to wear a wire as “sarcastic.”

Former FBI official James Baker testified to Congress last year that Rosenstein was definitely not joking when he offered to wear a wire.

This is why they are going after Kavanaugh again.

Lindsey Graham has revealed something about Christopher Steele and the Hillary dossier. We knew that the State Department and British intelligence bot warned that Steele was unreliable and that you should not take the dossier as truthful. But, now Graham has revealed that five or possibly six entities warned the FBI that they shouldn’t take Steele seriously. Therefore, not only could they not verify the dossier but they were told that it was unreliable and they still signed off on the dossier as verified. Graham says he can’t reveal all of the sources yet as the documents are still classified.

Graham discussed the assessment of Steele during a radio interview with host Sean Hannity, but he stopped short of describing all of the information regarding the former British spy because much of it is classified.

“There’s four events that I’m aware of, five actually, where the system was informed that Christopher Steele was an unreliable informant when it came to Trump,” Graham told Hannity.

“Some of them I can’t tell you yet until we get this stuff declassified. But I think it’s going to be five; it may be six,” the South Carolina Republican added later. (RELATED: DOJ Inspector General Has Completed FISA Abuse Probe)

Republicans have accused the FBI of abusing the Foreign Intelligence Surveillance Act (FISA) by relying on Steele’s unverified reports in applications to wiretap Carter Page, a former Trump campaign adviser.

Permalink Reply by Doug Fox on September 18, 2019 at 9:50am
The declassification of documents begin
https://www.whitehouse.gov/briefings-statements/statement-press-sec...

I am SO HAPPY to read this, Doug! They are all going to go down.

Q from Feb of 2018 LOOK at what has just come out with this Trump/Ukraine nonsense. Anyone that doesn't believe in Q, heres some proof!

#Crowdstrike is more important than most people realize.
How did China get intel on CIA assets who were killed & imprisoned in that country? 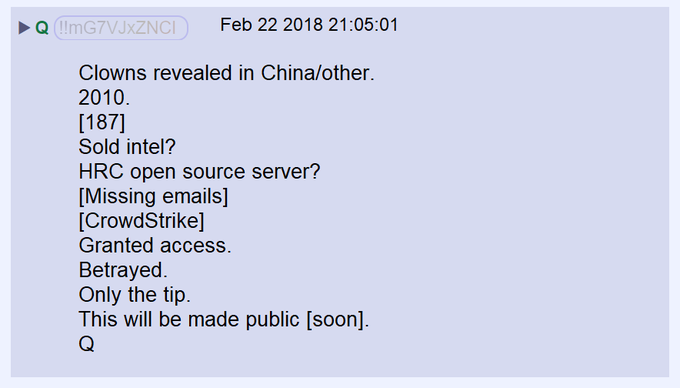 Permalink Reply by Fundamental Refounding on October 1, 2019 at 6:25pm

Barr Went to Rome to Hear a Secret Tape from Joseph Mifsud, the Professor Who Helped Ignite the Russia Probe

ROME–When Attorney General William Barr showed up at the U.S. embassy’s Palazzo Margherita on Rome’s tony Via Veneto last week, he had two primary requests. He needed a conference room to meet high level Italian security agents where he could be sure no one was listening in. And he needed an extra chair for U.S. Attorney John Durham of Connecticut who would be sitting at his right hand side.

Barr was in Rome on an under-the-radar mission that was only planned a few days in advance. An official with the embassy confirmed to The Daily Beast that they had to scramble to accommodate Barr’s sudden arrival. He had been in Italy before, but not with such a clear motive. Barr and Durham are looking into the events that led to Robert Mueller’s Russia investigation, and suddenly all roads were leading to Rome.

The Daily Beast has learned that Barr and Durham were especially interested in what the Italian secret service knew about Joseph Mifsud, the erstwhile professor from Malta who had allegedly promised then candidate Donald Trump’s campaign aide George Papadopoulos he could deliver Russian “dirt” on Hillary Clinton. The Italian Justice Ministry public records show that Mifsud had applied for police protection in Italy after disappearing from Link University where he worked and, in doing so, had given a taped deposition to explain just why people might want to harm him.

Ever since Robert Mueller concluded his probe in March 2019, Barr has worked to blunt its impact—and investigate the investigators behind it. Barr assigned Durham to look into the Mueller probe’s origins. And the Attorney General’s name is listed in the whistleblower complaint about the July 25 call Trump made to the Ukrainian president to pressure him into investigating political rival Joe Biden. According to the complaint, Barr was directly involved in the president’s attempt to “solicit interference from a foreign country in the 2020 U.S. election.” The minutiae of his involvement are feeding a scandal gripping Washington that changes by the nano-second.

The U.S. Department of Justice did not return numerous emails and calls for clarification about Barr, Durham, and Mifsud. But they did issue a statement on Monday confirming that the American legal team had been in the eternal city.

“As the Department of Justice has previously announced, a team led by U.S. Attorney John Durham is investigating the origins of the U.S. counterintelligence probe of the Trump 2016 presidential campaign,” Kerri Kupec, the Justice Department spokesperson said in a statement. “Mr. Durham is gathering information from numerous sources, including a number of foreign countries. At Attorney General Barr’s request, the President has contacted other countries to ask them to introduce the Attorney General and Mr. Durham to appropriate officials.”

The Italian intelligence community had Mifsud on their radar for some years before he got involved in the Trump campaign’s troubles. His affiliations with both the Link University of Rome and London Center of International Law Practice—both often affiliated with western diplomacy and foreign intelligence agencies—made him an easy target. So did the slew of apartments he owned in Malta that are allegedly tied to a racket involving Russians buying Maltese passports for cheap.

AG Barr Is Ramping Up His Probe Of CIA, FBI Activities In 2016

Attorney General William Barr has met with foreign intelligence officials, including during a trip to Italy earlier in September, regarding an investigation into surveillance activities against the Trump campaign, The Washington Post reported.

Barr was joined in the meeting by John Durham, the U.S. attorney in Connecticut, WaPo reported, citing anonymous sources familiar with the matter.