This is a must! The indoctrination has got to be stopped!

That it doesn’t only screams this: America’s public school systems have become utter failures.

So the one thing patriots in this country should throw all their efforts into right now is taking back the schools from the far-leftists who’ve been able to dominate the direction of administration and teaching in recent years.

Look at America’s schools in years past versus years present.

Can't stress this enough.  Patriotism lives because of proper education and it dies because of improper education and Leftist indoctrination.  The elections in cities, towns, counties and states are every bit as important and crucial as any federal election, if not more so.  Getting involved in local school board elections and town council elections is a great place to begin changing things from the bottom up.  It's up to "you".  Like we said in the Marine Corps to protesting folks:  "It can't always be someone else's kid."  American's shouldn't be apathetic and lazy when it comes to the education of their children.  Let's face it, that's how we ended up where we are today.

Truer words have never been spoken, Jerome! It all went downhill with Jimmy Carter and his creation of the Dept of Education. The left knew what they were doing. Get the kids early and indoctrinate them. I wish my husband weren't sick because I would run for office myself. I was raised by One Tough Marine, who became mayor of our township where I grew up. The left was fighting him at every turn back then. They didn't win any of their battles with him, where they were trying to stop him from doing anything positive for the township. We have got to turn this all around.

I saw this and had to post it for you! I follow this person on twitter. Not only is he right, he is also quite funny.

You go in normal - you come out a virtue signaling, communist snowflake who can't tie your own shoelaces.

With technology - and hard work - you can get the same education right there on your computer, for free. 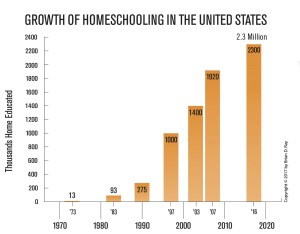 I would absolutely home school my children without question if they were school age. There is no way in hell I would allow those insane liberals to warp my kids brains.

Should the Leftists gain control of this Republic, America will no longer be a Republic.  You can bet your bottom dollar that home schooling will be quickly and permanently outlawed.  The Leftists will indoctrinate the children to the point of being Nazi Brown Shirts and will be rewarded for spying and turning their parents in to the authorities.  Under a Leftist administration, all children of school age will become property of the Left.  This is something we as Americans can not allow to happen, it's going to come down to Liberty or Death one day in the not too distant future.  The 2nd Amendment will be deemed unlawful, the gun confiscation will begin.  The decision of whether to fight or lay down arms will have to be made by every man and woman, it's coming don't doubt me on this one. Jerome

I forsee everything you said here absolutely right on the money, Jerome! We are in a dogfight for the very survival of our Republic! I'm ready to fight!

Communist goal 17. Get control of the schools. Use them as transmission belts for socialism and current Communist propaganda. Soften the curriculum. Get control of teachers’ associations. Put the party line in textbooks.

Public schools have not failed, and neither have universities.   History, sciences, mathematics, and life skills have taken a back seat to indoctrination on gay rights, global warming, racial tensions.   Any graduate can speak with confidence on any of the latter three.  We the people have failed - for a few decades now - to give two craps about who is running our schools, and parents have failed to pay attention to what their urchins are learning.  And we wonder why?  (I really can’t stand kids and it’s showing)