The next President of the United States

I have both heard and recently read a few comments on Cruz needing more time in the Senate and seasoning.  Exactly what is staying in the Senate longer going to train Cruz better to do for the office of the President?  Let me first state that I am not in awe of Ted Cruz.  However, I would rather have someone with little experience in politics acting for this nation based off principles in line with our founding, than have some establishment progressive parasite lecturing compromise while acting against it.

The bottom line is there is no major in college to get a degree in presidency, nor is there a trade school for the job.  You are hit with all kinds of temptations and problems not found in any other position.  However, life provides people with problems and temptations all of the time.  Some of them may effect a person's job or their marriage.  How they respond is based on the principles they value, and the type of character and courage they hold when responding.

All people face adversity.  Very few jobs or decisions by any one man can and will effect an entire nation and the world beyond.  The presidency is trial by fire.  It is those times when the President comes under fire, that we as a nation will witness in the one we choose to lead us that there indeed is a difference between knowing the path, and walking the path.  We need to have someone with a solid core of principles and values far more in line with our founding fathers at the helm.  The alternative is more of the same.  More government programs, open borders, amnesty, debt, common core and compromise like so many seasoned politicians, both right and left, have provided us in spades.  Just my two cents.

Wow, so let me see if I understand this.  You're saying you wouldn't vote for Bibi?  Poor Bibi! 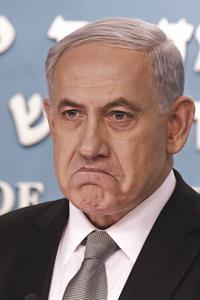 LOL, Rahth! That picture made me snort laugh!

I'm glad you liked it.   I got a chuckle when I saw the pic so I thought I would use it to lighten up the mood.

Permalink Reply by Jerseygal on January 25, 2015 at 8:13am
Rah, you did point out in another reply that there IS a difference in whom you support versus whom you default to, and that is important. This will be an interesting primary, to say the least. I do not want to see an establishment candidate either. What I would like to see is a longer track record than a partial term in any office.

I've been wowed by words in the past, and I don't mean Obama. My support will be for one whose actions have matched his words. That person is Gov. Scott Walker. Perhaps something will come to light to change my mind, but as of now, and for the last two years, he is my choice.

First, let me say that from what I know, subject to change, I have nothing against Scott Walker.  Again, we all have to vote our conscience.  My initial point in paragraph one was merely that a length of time in the Senate, in my humble opinion, does not grant presidential seasoning so to speak.  We can all think of several long-term senators that we would all agree have no place in that office.  To name just one, for example, that also has the added boon of being the Vice President of the United States:  Joe Biden!  We would probably all also agree that a long time in politics does not generally accomplish much in the way of improving the character of a man, or a woman for WodieJ, to become a better person to lead our nation.  I'm glad you liked the post hon.

Permalink Reply by Jerseygal on January 25, 2015 at 8:46am
Hi again, Rah. While length of time in the Senate or anywhere else isn't the main qualifier, a few terms will be a longer record of where he stands. My comment about Cruz staying there a while longer was mostly sarcasm. Biden was there a long time, and we know exactly where he stands. The same is true of John McCain. It wasn't in McCain's first term that he co-authored McCain-Feingold, and some of the other 'reaching across the aisle' stuff that conservatives view with disdain.

It's a good discussion, and I'd love to see many more like it as we go through the primary process.

In my opinion, it was also not the performance of Reagan as Governor of California that properly forecasted his eventual performance as President of the United States either.  How one stands by, and articulates, their principles when under fire is, however, a good indicator as to how they will continue to do so.  Though there is no guarantee regardless.

Permalink Reply by Jerseygal on January 25, 2015 at 9:05am
I agree there is no guarantee, regardless.

It is worthy of noting, and my above response should be edited to add, that it certainly was not Reagan's time as a member of the Democratic party that was a good measurement to forecast his eventual performance as the President of the United States either.  One might suggest, however, his speech in the support of Goldwater was a better indicator.  In fact, one could look at his platforms for his failed bids for the office of President, and compare it to the one that led to his eventual successful bid for the same office as the best of indicators.  Again, it comes down to one's willingness and ability to both stand by, and articulate, their principles when under fire that, in my opinion, is the best forecast of future behavior.  It was that willingness in Reagan, when most everyone advised against it, to state "Tear down this wall" when he stood before the world.  Having the right principles, and the character to stand by them, have made all the difference time and time again.  To name a few, George Washington, Abraham Lincoln and Frederick Douglass, I think, would all wholeheartedly agree.

Permalink Reply by Jerseygal on January 25, 2015 at 10:32am
Rah, Reagan's time as a Democrat, as CA Gov., as president of SAG, along with his speech for Goldwater, illustrated his growth as a leader. That included his switch to a pro-life stand. He was not an unknown, by any means.

JG, please point out where I said Reagan was an unknown, or anyone else was unknown.  I knew who Obama was before he was elected.  I know who Ted Cruz is as well.  If you feel you do not know who Ted Cruz is, don't vote for him.  It can't get anymore simple than that.

Permalink Reply by Jerseygal on January 25, 2015 at 11:01am
I did not mean to infer that you said he was unknown. I know you didn't say that. I'm merely saying that he'd been 'around' for quite some time.