I snagged this excerpt from Jodi’s Tids.

Horowitz: Where are the governors? Now the feds will experiment with failed shots on our young children

It is undeniable that this vaccine is the quickest-waning and deadliest one in history. Even if one believes that for older adults the cost-benefit analysis is still favorable — a determination hard to make with obfuscated data — it is incontrovertibly clear that young children don't need a vaccine for this virus, much less one that is known to cause myocarditis and numerous thrombotic ailments.

Just consider the fact that in Michigan alone, 574 vaccinated people died of COVID (not including those half vaccinated who are most vulnerable), more than the number of children who died nationally all year. And that factors in the likelihood that a significant number of those children didn't die from the virus itself.

The AP reported Wednesday that "within hours" of formal approval of the Pfizer shot for children 5-11 by the Centers for Disease Control and Prevention advisory panel, which is scheduled to meet on Nov. 2, "doses will begin shipping to providers across the country, along with smaller needles necessary for injecting young kids, and within days will be ready to go into the arms of kids on a wide scale."

This is as shocking and demonic as it is illogical. Yet they want to cover up the debate as quickly as possible and make this a reality in a shock-and-awe campaign.Their swift obsession with putting this in the arms of children after it has failed to even protect the elderly now raises even more suspicion about the entire premise of using this shot on anyone. Why would even the most pro-COVID-shot lobbyist ever have the least desire to use something like this on children, considering the myocarditis concerns alone? And unlike other approved shots, this one will be forced upon children with a degree of vigor never seen before.

It's no longer enough for Republican governors to merely pretend to oppose mandates, while still suggesting these are the safest and most effective shots ever. It's time for them to learn from the past nine months. We now have so much real-life experience with this shot. Just consider some of the following information we've learned:

There are now 16,766 deaths logged into VAERS, as well as nearly 70,000 hospitalizations. We already know from previous studies that VAERS only captures 1% of adverse events, and no other shot has come with such a stigma against reporting it for harm, often at the threat of the physician losing his job. Medicare data seems to hint to a much broader cohort of vaccine casualties. Yet rather than further study these unprecedented events, they are rushing to inject children who don't need the shots anyway and for whom the Pfizer shot in particular will only offer a few months' protection (if that, given the changing variants).  There’s much, much more.

Facts and safety don't matter. It's become a cult. The state governments need to ask all the questions being ignored by the feds and refuse to endorse these shots for anyone, much less kids, until they are answered.

k/r…and maybe send this article to your governor.

I actually had someone tell me that vaccinating kids is necessary to ‘protect teachers’ from the virus. My 2-part response? 1) I thought the masks did that, and 2) since when are teachers supposed to use their students as any kind of shield? Think about #2.

No matter how we as individuals feel about the vaccine itself, no one can justify to me the injection of children with a vaccine that has no long term tracking of effectiveness and side effects, against a virus that does not pose a serious threat to the vast majority of kids.

There was that possibility every flu season. How many tens of thousands die every year in the U.S. from the ordinary flu? But we didn't force the flu shot on anyone. There's really no need for a vaccine at all when we have effective therapeutics available.

Permalink Reply by Lawrence Brown on October 25, 2021 at 1:41pm
How many kids will die because government injects poison in them? Government wants de-population folks. What better way to do it. Mass murder of Americans and most don't care. Allow one black man killed by cop and people riot,destroy,burn,steal,murder. Socialist Democrats want America DEAD folks. Democratic party funded KKK and democratic senator from W. Virginia was leader until his death as senator. At his funeral democratic party praise him for his actions over years. Check it out before anyone replies. God Bless America Again.

No reason to give this shot to kids!

No and HELL NO. Any attempt to give this poison to my grand children will result in a very negative outcome.

I sure hope the schools don’t try to mandate this abuse!

California is mandating the COVID vaccine for kids. Could Connecticut be next?

California Gov. Gavin Newsom announced earlier this month he was imposing a coronavirus vaccine mandate for children in public and private schools – the first state in the nation to adopt such a requirement.

California’s mandate will be phased in as the FDA grants full approval to the shot for children. Students who opt out of the requirement – and who don’t have a medical or personal belief exemption – would have to be homeschooled.

Ask this:  It's only a matter of time before the 'vaccine' will be mandatory for kids to attend school, then, most likely, for all newborns.  Why do they want 100% (except illegals and Congress) vaccinated?

After researching and seeing all of the data concerning the covid vaccine, and especially the recorded effects the vaccine has had on young people, teenagers included, from permanent injury's to death, it should never be given to children!

By Age Group For Covid19 Vs. Non Covid19

[Edit to explain the graph] The red is for VAERS reports that got the Covid19 injection. The Blue is for VAERS reports that got a vaccine other than Covid19. These are all reports for vaccine adverse reactions so none are unvaccinated. Remember, the Non Covid19 reports started in 1990. The Covid19 reports started very late 2020. 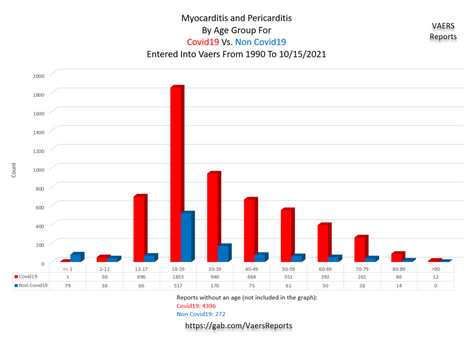 This means there is about 30 years of data for non Covid, and less than one year of data for Covid.  That is scary that they are pushing to vaccinate kids….who are (for most of them) not even at risk from the virus!