Finally, a Senator doing the job he was hired to do ... standing up for OUR rights under the CONSTITUTION!  THANKS Senator Paul for doing your job!

Thanks for the link!

Here Are All the GOP Senators That Participated in Rand Paul’s 12+ Hour Filibuster… and the Ones Who Didn’t. 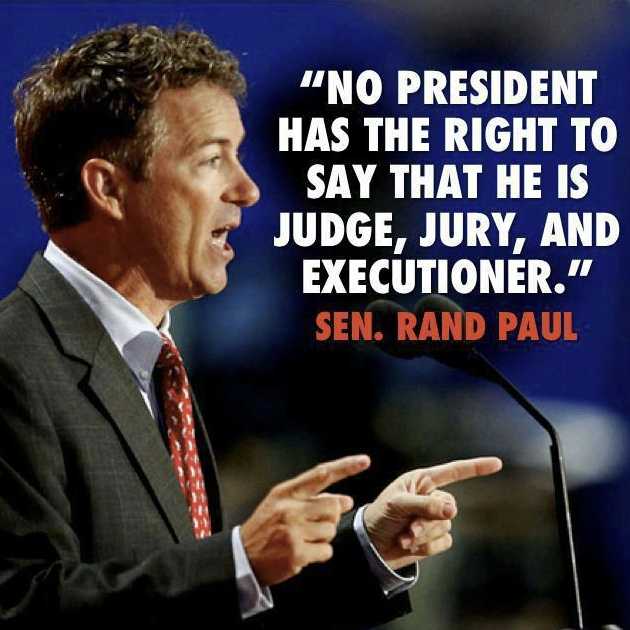 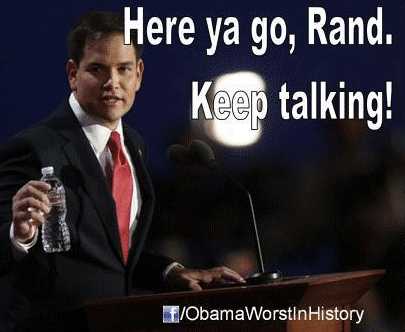 After Rand Paul voted for the last 3 Obama nominees.... He's not doing the job he was sent to do, he's playing politics, in fact, in his filibuster he brought this up to say "this isn't about partisanship" just before noting his votes, that's why I know about it.

It seems that in the end Brennan has the votes, so this whole thing is now more theatrics than anything else, or will be portrayed as that after Brennan is confirmed.

A Senator doing their job would have voted against those nominees who wouldn't be good for America, such as Hagel, and then do this filibuster too, making the filibuster the punctuation of his statements made by his previous votes, and then explain how he's a Conservative first and a Republican 2nd, or in Rand's case a Libertarian first and Republican second, to explain it's not partisan but Constitutional, and then go into all the unconstitutional acts of the President, even seeking an investigation of the President to impeach him for sake of the Constitution and meeting the obligation of American Government to act in a limited manner, even abstaining, always in caution of their trespass outside the boundaries of the Constitution to naturally then trespass upon the freedom of the people, and to make this these conditions that 60% of the Senate must agree to if they wish him to end his filibuster.

The People want the government to act in governing while not taking away their freedoms, our representatives are meant to represent this within the government as this is what the Constitution is intended, as the rulebook of good governance, to assure.  Our representatives, ala who are elected by popular vote, have a duty to represent all that are in their district, that is done by objectively following the Constitution, and when We the People are discontented by the acts of government and let our representatives know, they are to do whatever it takes to stop all subjective activities of government to get government back to acting in pursuance of the Constitution.  I see that to the extent of "an old fashioned filibuster" but nothing else, nothing more from it, nothing that forces his colleagues in both houses, all 535 of them to take a long hard look in the mirror and know they haven't done their job since they were sworn in.

Might seem like I am asking too much, however America is this screwed up because we do not know what the servitude of our public servants is, and what acts remove them from office instantly as these acts are so heinous to freedom they render the office vacant, or that it would be better if it were empty than to have that person in it.

My food for thought after a very bad computer day hahaha

I believe that Brennan always had the votes. What I feel Rand Paul did yesterday along with Senator Ted Cruz, who was amazing IMO, was to bring attention, not only to the unconstitutional drone program, but also a whole host of other things that have been done by this administration. It went world wide, Toddy! It brought some on the left to come out in support of what he was doing. When you can get Van Jones and the ACLU backing you, you are doing something right! The things said by Rand and Senator Cruz about the way Obama has been operating, with his concentration of power in the executive branch, and that there are the 3 equal branches of government, and that they are not going to let Obama run roughshod over Congress any longer, needed to be said loud and clear! It was seen by people on both the left and right.  It exposed this White House to those who only listen to MSNBC and Chris Matthews. That's what happened yesterday! I for one, am happy that someone finally stood the heck up! Isn't that what we have all been wanting all along?

:-) Thanks Jodi! Last night was the first time in a very long time I actually felt good, proud and hopeful.

Thank you Hobbes! Thank you very much! :)

Toddy and Robin, Can I share parts of your posts above?