President Barack Obama followed up his recent probing and informative interviews with YouTube celebrities by granting an interview to liberal blog Vox, during which he claimed the terror attack on a Paris kosher deli was “random.” (RELATED: Vox Founder: France Shooting Has Nothing To Do With ‘Cartoons Or Religion’)

"Look, the point is this: my first job is to protect the American people. It is entirely legitimate for the American people to be deeply concerned when you’ve got a bunch of violent, vicious zealots who behead people or randomly shoot a bunch of folks in a deli in Paris. We devote enormous resources to that, and it is right and appropriate for us to be vigilant and aggressive in trying to deal with that — the same way a big city mayor’s got to cut the crime rate down if he wants that city to thrive. But we also have to attend to a lot of other issues, and we’ve got to make sure we’re right-sizing our approach so that what we do isn’t counterproductive."

It isn’t clear what the president means by calling the attacks “random.” The deli shooter, Amedy Coulibaly, had previously pledged support for ISIS, and his wife even recently filmed a propaganda video for the group calling for more terror attacks on France.


Furthermore, the choice of target was far from random. Porte de Vincennes was a kosher deli servicing the local Jewish community. All four of Coulibaly’s murdered hostages were French Jews. French President Francois Hollande has even said the hostage situation “was obviously a horrible anti-Semitic attack.”

Permalink Reply by Jerseygal on February 10, 2015 at 7:56pm
Wow...random? Those people were shot because of who they they were and what they believed. There was nothing random about it!

Unbelievable JG.  I'm pretty sure there were no shoppers in there from the Knights of Columbus.

How dumb does our government think we are?

I guess, in his case, not so much.  Maybe he really didn't express what he meant when he spoke about fundamentally changing America or when he said he would side with the Muslims when the political winds turned ugly.  Remember, he never explained HOPE or CHANGE.  He left the definition to the listener.  Maybe that is what he is still doing.  What an excellent way to sow the seeds of division in America.

Permalink Reply by Jerseygal on February 10, 2015 at 8:50pm
Seeds of division.... JB, I think America is more divided since Obama, than at any other time in my adult life, and he has been sowing those seeds all along!

Earnest: Not sure if Jews are terror targets, and climate change is a bigger threat anyway

If you missed it yesterday, the President of the United States equated his counterterrorism responsibilities as commander-in-chief of the armed forces to serving as a big city mayor addressing and mitigating the threat posed by local crime. He added that he thought the radicalized Islamist who attacked a kosher deli in Paris last month targeted his victims “randomly,” and said that climate change represents a greater threat to global security than radical terrorism but that it was too complex of an issue for the press to give it the focus it deserves. Yes, it was that bad.

On Tuesday, Earnest was pressed to explain the president’s thinking on these matters. The press secretary appeared to have a tough time of it:

As for President Obama, he never was Charlie, not even for those 48 hours. From the day of the massacre, he has been practically invisible. At the interstices of various political rallies, he issued bits of muted, mealy-mouthed boilerplate. Followed by the now-famous absence of any high-ranking U.S. official at the Paris rally, an abdication of moral and political leadership for which the White House has already admitted error.

But this was no mere error of judgment or optics or, most absurdly, of communications in which we are supposed to believe that the president was not informed by staff about the magnitude, both actual and symbolic, of the demonstration he ignored. (He needed to be told?)

On the contrary, the no-show, following the near silence, precisely reflected the president’s profound ambivalence about the very idea of the war on terror. Obama began his administration by purging the phrase from the lexicon of official Washington. He has ever since shuttled between saying that (a) the war must end because of the damage “keeping America on a perpetual wartime footing” was doing to us, and (b) the war has already ended, as he suggested repeatedly during the 2012 campaign, with bin Laden dead and al-Qaeda “on the run.”

Permalink Reply by Jerseygal on February 10, 2015 at 9:20pm
Robin and Don, thanks for adding the related stories! Krauthammer's comments are spot on! I loved watching Josh (not) Earnest squirm!

I shared this on another thread. This one fits here! I know I am on some list of the govt. LOL 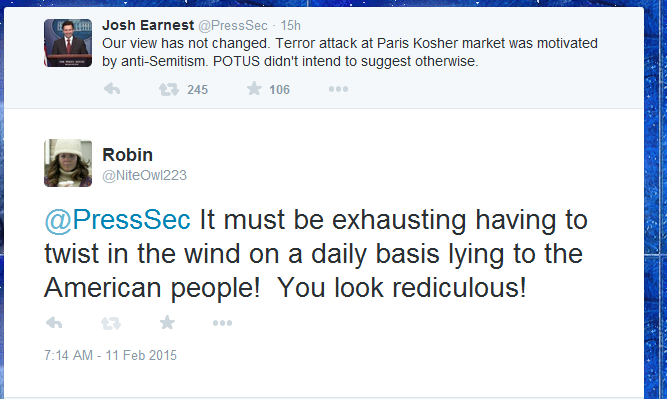 Rumor has it that you are on the following lists:

Is that a drone I hear?  I think I likely have one near me.  You might also as well.  But you are more hidden I believe.