More than two years later, the ugly truth about Benghazi continues to trickle out. Like this critical email — just released — that shows the Pentagon urgently offering help to the unfolding attack in Benghazi on September 11, 2012. And although it came after the first wave of the attack at the consulate, it occurred before a mortar strike on the CIA annex killed Ty Woods and Glenn Doherty.

As Judicial Watch notes, the new email ‘leaves no doubt military assets were offered and ready to go, and awaiting State Department signoff, which did not come.”

In other words, the Pentagon was offering military assets that potentially could have save the lives of American citizens — if only the State Department had signed off.

Of course, we all remember who was leading the State Department at that time. Everyone’s favorite leading Democrat candidate for president, Hillary Clinton.

Via The Right Scoop:

An email recently obtained by Judicial Watch shows that the Pentagon was demanding Hillary allow them to send help to Benghazi during the 2012 attack. This would completely contradict the claim from Hillary and Leon Panetta that no forces were available and within reach to provide help to the compound that was under siege.

As the attack on the U.S. consulate in Benghazi was unfolding, a high-ranking Pentagon official urgently messaged Secretary of State Hillary Clinton’s top deputies to offer military help, according to an email obtained by Judicial Watch.

The revelation appears to contradict testimony Defense Secretary Leon Panetta gave lawmakers in 2013, when he said there was no time to get forces to the scene in Libya, where four Americans were killed, including U.S. Ambassador to Libya Christopher Stevens.

“I just tried you on the phone but you were all in with S [apparent reference to then-Secretary of State Hillary Clinton],” reads the email, from Panetta’s chief of staff Jeremy Bash. “After consulting with General Dempsey, General Ham and the Joint Staff, we have identified the forces that could move to Benghazi. They are spinning up as we speak.”

Ironically, Hillary Clinton and her minions were concerned with spinning the story instead of gearing up the military forces.

The email was sent out at 7:19 p.m. ET on Sept. 11, 2012, in the early stages of the eight-hour siege that also claimed the lives of Foreign Service Information Management Officer Sean Smith and two former Navy SEALs, Ty Woods and Glen Doherty, private CIA contractors who raced to the aid of embattled State Department workers.

Although the email came after the first wave of the attack at the consulate, it occurred before a mortar strike on the CIA annex killed Woods and Doherty.

“This leaves no doubt military assets were offered and ready to go, and awaiting State Department signoff, which did not come,” Judicial Watch, a nonprofit government watchdog said in a statement.

Parts of the email from Bash were redacted before release, including details on what military forces were available.

So there it is. Panetta and Hillary LIED to the American public over and over, and the media never pressed them enough to demand answers.

The clincher? This information has been available since a month after the attack. But as Judicial Watch notes:

The Obama administration and Clinton officials hid this compelling Benghazi email for years,” said Judicial Watch President Tom Fitton. “The email makes readily apparent that the military was prepared to launch immediate assistance that could have made a difference, at least at the CIA Annex.  The fact that the Obama Administration withheld this email for so long only worsens the scandal of Benghazi.”

Meanwhile, the White House today declared leading GOP presidential candidate Donald Trump disqualified to be president in light of his call for a temporary halt on Muslims entering the United States — at least,  “until our country’s representatives can figure out what is going on.” This, in the name of protecting American citizens from a very real terror threat — enemies who have revealed themselves and openly declared the refugee crisis a war tactic.

Now, you tell me who’s disqualified to be president?

I seriously think it's going to be, JB!

Permalink Reply by Jerseygal on October 29, 2016 at 10:22am
I hope so too!!! This issue alone should have ended any chance for that woman to be back in the White House!

Clinton's most emailed aid in the US State Department, Jake Sullivan, used personal email to talk with Clinton about bringing down Libya.

It’s called the “tick tock” email, just recently released by Wikileaks. The email shows Hillary Clinton’s office outlining how Mrs. Clinton must be given full credit for what took place in Libya before and after the fall of the Gaddafi regime – a fall that resulted in a missing 1.5 billion dollars sent to Libya by Hillary Clinton, the subsequent death of four Americans, including the first U.S. ambassador to die on duty in more than thirty years, and thousands more deaths as Libya descended into anarchy.

And it was all done after the House of Saud wished it so – the very same House of Saud that has“donated” millions to the Clinton Foundation and the Hillary Clinton campaign.

And here is the tick-tock email showing how badly Hillary Clinton wanted credit for Libya.

Since the country has fallen into chaos and become and ISIS stronghold, Mrs. Clinton and her campaign don’t wish to discuss it anymore…

Now here is a bit of history the Mainstream Media has said almost nothing about. The reason for its deletion is simple – it directly links to Barack Obama and Hillary Clinton and what took place with the fall of Libya in 2011.

For years, Gadaffi and the House of Saud were embroiled in a long-standing dispute over who was the true and rightful representative of Islamic power in the Middle East – though the dispute had more to do with Libya’s growing influence in oil production. Libyan oil is among the best in the world, commanding a top-dollar price, a fact that was not lost on the Saudi royal family who did not appreciate competition in that regard.

Gaddafi, unlike other Muslim leaders, was willing to openly challenge the House of Saud, and claim it was joined too closely with the American government, a challenge that in this video, was met with the following response from the Saudi King:

“The lie is before you, and the grave is in front of you.”

Some two years after this altercation, Gadaffi was killed via an effort orchestrated and funded by the Obama government and the Hillary Clinton State Department. The grave truly was put in front of him – by Hillary Clinton.

The House of Saud has since donated between $10 and 2$5 MILLION dollars to the Clinton Foundation and continues to donate to the Hillary Clinton campaign. A ZERO HEDGE article from earlier this summer indicated that the Saudis are as of now, funding approximately 20% of the entire Clinton campaign for president.

Hillary Clinton, as Secretary of State makes that happen, creating the ISIS hell that is now Libya. 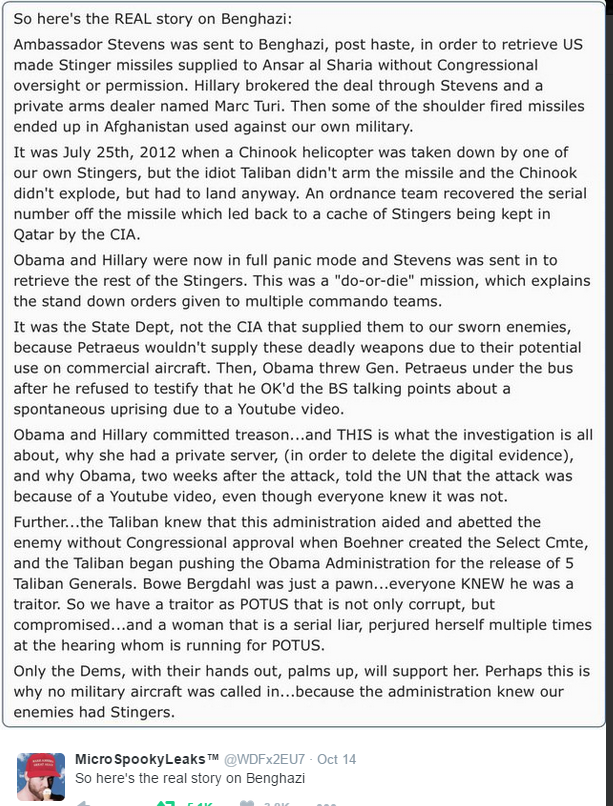 Permalink Reply by Jerseygal on November 2, 2016 at 10:38pm
So, if she authorized military aircraft for a rescue, and it was shot down by one of the Stingers, it would be harder to cover up what was really happening.

Exactly! Imagine one of our aircraft being shot down by one of OUR Stingers.

Lawrence Brown replied to Ruthann's discussion Biden Death Panels BEGIN: Antibody Treatments to Be RATIONED to Red States
"Our constitution allows we the people to take over control and shut down these communist traitors.…"
8 hours ago

Jerseygal replied to Jodi180's discussion "Why Vaccine Passports Equal Slavery Forever"
"Lawrence, it’s the indoctrination of students which has been going on for decades.  The…"
9 hours ago

Jerseygal replied to Ruthann's discussion Biden Death Panels BEGIN: Antibody Treatments to Be RATIONED to Red States
"Cuomo’s death panels sent Covid patients into nursing homes (his replacement may be even…"
9 hours ago