Is This The Sort Of Liberal Elitism That Will Fix The Country?

Their arrogance knows no bounds!

Representative Bruce Braley (D-Iowa), a trial lawyer running for retiring Senator Tom Harkin’s seat, is featured in a recent video warning a gathering of law professionals that not supporting his candidacy means risking handing the top position on the Senate Judiciary Committee to “a farmer from Iowa who never went to law school.”
Braley’s remarks, directed at Senator Chuck Grassley (R-Iowa), were reportedly made at an event in Corpus Christi, Texas:

Personally, I would rather have a group of ex-truck drivers in Washington.  I've always had little respect for lawyers in general, as they have never actually done anything except to take money from truck drivers (or farmers, etc.) because they can't understand laws written by other lawyers (aka, elected politicians).

I am with you on the "little respect for lawyers" D.A. They are on the level of snake oil salesmen. We have enough lawyers in government. Time for common sense Americans, like the farmers, truckers or anyone willing to serve their fellow American.

It is a little known fact (provided to my by a practicing lawyer) that a majority of lawyers graduate from universities and colleges that DO NOT REQUIRE a basic course in the CONSTITUTION.

We the people need to ask lawyers who want to be politicians if they have a graduate level course in the Constitution.  If not, they need to explain why.

Thanks for that information JB. That would explain why so many lawyers are clueless when it comes to the constitution.

We do need to vet our candidates better than we have, and especially attorneys that are running for public office.

JB, do you mind if I share that information on tweeter?

OF course you can.  But, thanks for asking.

I have often wondered how someone crowns themselves an elite?  Especially since most of them are so dumb and clueless.

I imagine RN, that the elitist are the ones, who as children, thought that they deserve the trophy, even though they came in last place in the game.

We already know that the liberals are adults, that emotionally, never progressed past a child in middle school, so like most kids that age, they are very narcissistic.

I also agree with your assumption that they are dumb and clueless. :-)

I agree with every word you just said, Kwic!

People like this make me want to hurl! Just WHO do they think they are, anyway? I'm going to rant here a bit. Ok, I may have said this before, but I will say it again. I grew up in a Conservative household, along with my 2 sisters. My oldest sis went to college where they sucked every bit of her brain out, along with her common sense! She is a Principal in Hawaii! She is like a stranger to me really. When we talk on the phone, it's like I am talking to a stranger. The good memories I have with her are my young years. That's about it! It is sad! She bought into the libling, progressive bullcrap, hook-line-and sinker! The only thing she knows is what she got her Masters in! She calls me to explain to her how to do simple things on the computer, like how to do Ebay. Really? If I were to ask her to help me put up tile, or lay a floor, or fix something, she would look at me like I have two eyes. She is HELPLESS! Not one ounch of common sense at all. I love her, she is my sister... BUT, they GOT her! We can not even begin to talk politics. She turns into Beckel! Sad!

I am so sorry Robin. Unfortunately, that happens more often than we want to admit. Our centers for higher learning are centers for indoctrination.

I have people in my family that are like that. If I try to share with them that our country is in trouble, they either tune me out, avoid me, or explode in a "I am not going to listen to this BS tirade". I pray that someday, your sister and others that have been, basically brainwashed, wake up.

Thanks, Kwic! I have a total of 3 like that in my family. My oldest sister, my uncle and my youngest (step) daughter. ALL were conservatives until the indoctrination process took place. AKA/Brain sucking 101 :)

Here's me and my two sisters. I'm the baby! Yay! 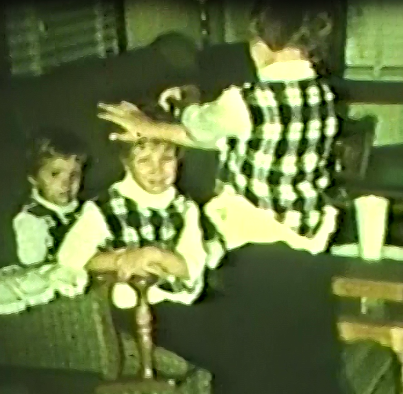 Why on earth my mom thought to put us in the same outfits like we were triplets, I have NO idea! LOL