I Wonder When We'll Hear About This On The "News"?

Just when you think it can't get worse...

U.S. Government Made ‘Humanized’ Mice With Tissue from Babies 17- to 22-Weeks Gestational Age

A group of government researchers working for a National Institutes of Health laboratory in Montana made “humanized mice” by implanting the mice with tissues cut from human livers and thymuses taken from babies at 17 to 22 weeks gestational age.

The researchers then published a paper describing how they constructed this particular type of “humanized” mouse, saying they hoped their description of the process would help other researchers seeking to make such mice in the future.

The same government researchers had collaborated on another journal article about the “humanized” mouse with an NIH-funded researcher at Massachusetts General Hospital--which has an ongoing federal grant that also involves humanizing mice using human fetal livers and thymuses.

The NIH could not answer some basic questions about the fetal tissue used in these research projects that U.S. taxpayers funded.

The researchers noted that they followed NIH rules in the treatment of animals.

So what, NIH is keeping PETA happy?  Unbelievable.

The NIH researchers’ April 24, 2014 article in Immunological Methods cited an earlier article on the TKO-BLT mouse that had been published on Dec. 12, 2013 in Blood. This article also had a technically worded title: “BLT-humanized C57BL/6 Rag22/2gc 2/2CD472/2 mice are resistant to GVHD and develop B- and T-cell immunity to HIV infection.”

“The proposal, entitled ‘Optimizing Human B and T Cell Vaccines Against HIV Using Humanized BLT Mice,’ is designed to advance the field of HIV vaccine discovery research by studying the efficacy of various vaccine approaches to block and control HIV infection in the recently developed humanized mouse model,” the release said.

Back on April 25, 2013, about eight months before the Blood article was published, the Ragon Institute of Massachusetts General Hospital, MIT and Harvard put out a press release announcing this $12.4 million federal grant.

According to the report in Politico, one of the biotech firms mentioned in the undercover videos identified as a fetal tissue supplier Planned Parenthood sold aborted babies to earned at least $300,000 from federal governmental agencies after selling fetal tissue to them. Officials say they are unsure if the specific fetal tissue sold to the Obama administration came from babies aborted at Planned Parenthood.

According to the Politico report, the National Institutes of Health has paid Advanced Bioscience Resources $257,000 since 2009 and spent $53,000 on fetal tissue from aborted babies. The babies victimized by abortions were between 17 and 22 weeks old at the time they were aborted.

Meanwhile, FDA officials confirmed the Obama administration agency paid approximately $73,000 to the biotech company since 2009 for body parts from aborted babies, including livers and thymuses. The Politico report indicates ABR charged the Obama administration $340 for a 17- to 22-week human fetal thymus, $340 for a 17- to 22-week human fetal liver, $325 for a maternal blood test — in addition to shipping costs.

“Voluntary donation of tissue for research has helped understand, treat, and cure a number of conditions and diseases that affect millions of Americans, and it has enjoyed bipartisan support and the support of leading scientists and disease groups,” Health and Human Services spokesman Kevin Griffis said in a statement. “We make clear to all our grantees and researchers the legal obligations they are under and we know of no violations of laws in connection with the research done at our agencies.”

The purchases make it more understandable why the Obama administration has refused to investigate or de-funding Planned Parenthood.

All for an HIV vaccine.  Is anyone else as disturbed and outraged as I am?

Cool, this may be the first time Dr. Seuss wrote something that actually made sense to me.  Sorry, I'm an old fashioned nursery rhyme fan, mostly because I'm old, or is that Ye Olde? 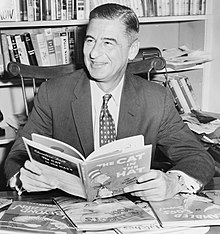 Good information. I had just read his books for their entertainment value.  Didn't know the social outlook of the man.

More on saving those who engage in behavior that causes AIDS over saving unwanted babies:

The reporter/spin artist on this one was Jennifer Ludden. In a brief interview on Alabama, Louisiana and New Hampshire cutting off the abortion conglomerate, Weekend Edition Saturday fill-in anchor Linda Wertheimer asked Ludden about that impact in states that have cut state funding for the organization.

WERTHEIMER: Now, in the states that have already defunded Planned Parenthood, can you see a big impact?

LUDDEN: You absolutely can. Texas — a study just out this spring — found that a quarter of the state’s family-planning clinics have closed. The ones who are left are only serving half as many women as before. The state’s own study this year found 30,000 fewer women in Texas getting healthcare through its programs. That means fewer cancer screenings, less testing and treatment for sexually transmitted diseases and, of course, less birth control. Health experts say that the upshot of this will be more unplanned births and more abortions.

“Health experts” like the publicists for Planned Parenthood. And….

LUDDEN: In Indiana, which has also cut funding to Planned Parenthood, you might recall a big story this spring of an HIV outbreak there. The government called it an epidemic. That happened in the county where the state cuts forced a Planned Parenthood clinic to shut down two years ago.