I'm happy to see this! I can get behind this one! 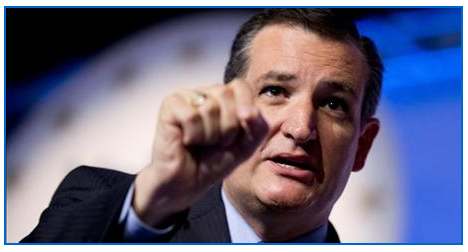 Team Ted Cruz is taking shape, and the Senate first-termer's presidential campaign could start before this spring. The Republican senator from Texas tentatively plans to fill senior campaign positions with the triumvirate he signed last summer to expand his political operation. At the top is Jeff Roe, whose organizational title is undefined but who would be the campaign’s chief strategic and logistics decision-maker. Jason Miller would shape and oversee campaign messaging; Lauren Lofstrom would direct fundraising. Cruz is in the process of “feeling out” additional campaign hires and prospective donors in preparation to join the field of 2016 candidates. If the senator decides to run for president, he wants to hit the ground at full speed, a senior Cruz advisor confirmed Monday...Rounding out the team are pollster Chris Perkins, who earned plaudits for being among the few to correctly forecast November’s Georgia Senate race, and Jason Johnson, the senator’s longtime political consigliere. Nick Muzin, Cruz's deputy chief of staff in his Senate office, is steeped in South Carolina politics. He is viewed as someone who might take a leave of absence from Cruz' Senate office to join the campaign...“His early reviews among tea party audiences have been stellar in Iowa,” a Republican insider in the Hawkeye State told the Examiner. “I don't think he can appeal as broadly in the party or in the general electorate as other candidates, buthis support will be intense among those voters who have the highest anger score.”

Dan wrote up this week's CBS News poll of Republicans, which contains good news for Mitt Romney and Jeb Bush (quite possibly a product of name recognition at this early stage), and bad news for Chris Christie and Sarah Palin (both of whom generate far more "don't run" responses from members of their party).  Several of the other prospective contenders are slightly above water on the run/don't run question -- Huckabee, Rubio, Walker, Carson -- while others are narrowly underwater: Paul, Perry, Jindal, Santorum…and Cruz, at (21/25).  I'll leave you with Cruz making his case to a crowd of conservative activists in South Carolina.  He decries the GOP's "mushy middle," arguing that nominating another moderate guarantees another loss:

Ted Cruz on SOTU: ‘The Top One Percent are Doing Great Under Barack Obama’

Senator Ted Cruz, a potential 2016 Republican presidential candidate, reflected on Obama’s State of the Union Address on Tuesday night, appearing with FOX News’ Megyn Kelly on The Kelly File, following the speech, a speech that was filled with Marxist claptrap under the guise of “fairness” and “equality.”

“I thought the speech tonight was really disappointing,” Sen. Cruz told Kelly. “You know, the president had an opportunity to be magnanimous, to be gracious, to recognize that just two months ago the American people voted overwhelmingly, rejecting the current path we’re on. He could have said ‘I hear you and we will work together, we’ll get back to where we should have been in the first place; we should have been focusing on jobs and economic growth and opportunity.’”

Cruz said that Obama instead chose to not listen to the American voters and doubled-down on the “same failed policies in the last six years, more taxes and spending and debt.”

Cruz then turned the tide on Obama’s class warfare rhetoric, pointing out that the top one percent of income earners are a higher percentage of national income than any year since 1928.

“It is true that the top one percent are doing great under Barack Obama,” he said. “The sad reality is with big government under the Obama administration, the rich and powerful, those who walk the corridors of power in the Obama administration have gotten fat and happy, but working men and women across this country — we have the lowest labor force participation since 1978.”

“The reason the unemployment rate keeps falling is millions of people keep dropping out of the workforce, altogether, so they’re not counted in that number,” he explained.

“Median wages have stagnated and this is an administration that benefits those with connections to Washington with influence, and hard-working men and women are finding it just harder to make ends meet,” Cruz contended.

Cruz was critical of Obama’s threatened vetoes on issues like the Keystone pipeline, amnesty, and Iran sanctions while simultaneously saying that he wants to work with Republicans.

Obama is such a liar.  It is time people in Washington stop being so polite and politically correct -- he is what he is.

He wouldn't know the truth if it hit him in the face, JB! He has lied his entire life! It comes natural to him!

I sort of like Cruz and even Rand Paul.  Cruz along with Trey Gowdey may have the highest personal convictions in Washington DC, means caring the most.  Because of his background, I think Cruz knows why freedom and the US winning are important.

I tend to like Rand Paul since I think he is quite smart.  I am not certain I agree with 100% of what he says, but I think he more than most might have the intelligence to figure it out.  So would Condoleeza Rice, but she aint running except maybe for the head of the NFL and taking over the rulings on deflating footballs.

There is something to be said for what both Cruz and Rand Paul seem to say ... that maybe we need someone fresh.

RN, I won't vote for any of the RINOS. Voting for a Jeb, Romney or a Huckabee is voting for status quo and I won't do it! I will NOT go and pull that lever! We need a Conservative! Cruz is my man! Sen. Ted Cruz (R., Texas) will file legislation on Friday to ban American citizens who fight alongside the Islamic State (IS) and other terror groups from returning to the United States, where they pose a significant terror threat, according to sources in the senator’s office.

Cruz, who first proposed the legislation lastyear, seeks to strip those Americans who travel abroad to fight with IS (also known as ISIL or ISIS) of their U.S. citizenship rights and stop them from coming back stateside.

The bill, known as the Expatriate Terrorist Act (E.T.A.), tightens and updates existing regulations by which a U.S. citizen effectively renounces his or her citizenship.

Cruz said that he is filing the bill partly in response to President Obama’s Tuesday State of the Union address, which he described as “detached from reality” on the foreign policy front.

“President Obama’s approach to foreign policy refuses to acknowledge the threats our enemies pose to our national security—it is detached from reality and making the world a more dangerous place,” said Cruz, who also is releasing a new video that takes aim at Obama for misleading the nation about these threats in his annual address.

“We’ve seen the grave consequence of the Obama-Clinton-Kerry foreign policy unravel with respect to Iran, Russia, and now Yemen,” Cruz said. “These consequences are not confined to faraway lands. They directly threaten America and our allies.”

“That is why this week, I am re-filing the Expatriate Terrorist Act, which prevents Americans who have fought abroad for designated terrorist groups from returning to the United States,” he said. “I look forward to working with senators on both sides of the aisle on this and additional measures to secure our nation and restore America’s leadership in the world.”

In his new video, an advance copy of which was provided to the Free Beacon, Cruz makes the case that Obama’s statements on the foreign policy front do not comport with reality.

From Iran to Russia, Yemen, and beyond, Obama painted a picture of his actions that do not comport with the truth on the ground. Multiple media outlets noted after the address that Obama’s remarks were “not close to reality.”

In the wake of the attacks in Paris and in the midst of upheaval in Yemen, the president refused to utter the words “radical Islamic terrorism.”

Regarding Iran, Obama said on Tuesday, “Our diplomacy is at work with respect to Iran, where, for the first time in a decade, we’ve halted the progress of its nuclear program and reduced its stockpile of nuclear material.”

Cruz’s video, called “It’s Time to Face Reality,” points out that Iran is continuing work on new nuclear reactors and still enriching uranium, the key component in a nuclear bombs.

It also challenges Obama’s statements on Russia, Yemen, and the fight against terrorism.

Speaking to a small gathering of pro-life activists Thursday, Ted Cruz frankly predicted that Republicans will lose the White House in 2016 if they “present a milquetoast alternative” as their nominee.

The Texas Republican acknowledged that he is actively considering a run for the White House himself, seemingly positioning himself as the type of candidate that evangelicals and the conservative grassroots can get behind.

“I’m looking at the race very, very seriously,” Cruz told the activists. “And I will tell you — the encouragement, the support we are receiving from the grassroots, all across the country, has been breathtaking.”

Permalink Reply by Jerseygal on January 24, 2015 at 2:37pm
I cannot get behind this one. He needs to stay a Senator a while longer. Remember...we are in the last two years of an eight-year-long hell under a man who had no experience, had a (sort of) law degree, and WOW-ed his party. He can Cruz thru the Senate a while longer.

Seasoning is a good thing in politicians and food.

Permalink Reply by Jerseygal on January 24, 2015 at 3:16pm
Well said, JB. Cruz brings a lot of good to the movement. He is just getting too big for his britches, in my humble opinion. The same goes for Rubio, and to a lesser extent, Paul. I do think that those three will help shape our eventual nominee, and that will be good.

At this point, he is about the only one I can get behind!  Can't vote for more of the same with any establishment nominee.