Ah yes there Meredith ... you are onto one of the biggest items of nonsense in world history - how selective in their choices are Obama and his followers.  Just like when Obama surrounded himself with families from Sandy Hook, he did not surround himself with families of the dead from his Fast and Furious program, or Benghazi, or Clinton and Janet Reno's Waco Massacre of 80 dead including 10 children and 2 pregnant women.  Nor were any of the families from 911. Ft. Hood or any place that his Muslim friends killed on US soil.  Yes, I totally agree... very selective.  Also in regards to Medicare he does not point out that he STOLE over 700 million over Medicare to finance Obamacare and seniors like me can go to Hades - but instead he talks about some theoretical think Republicans say that never went into effect.  Very, Very selective.  Democrat Scott Brown in CA during the last Governors race called Meg Whitman his opponent a whore.  As former head of Ebay, excuse me, but I do not think Meg would mean the money.  No apology.  Meg lost since this made perfect sense to the CA brain dead.  But Meg got the last laugh becoming the head of HP, a prestigious firm that I feel certain paid better.  But in contrast to the disgusting treatment of Meg, Rush Limbaugh called the Georgetown student who wanted money for her sex life a slut (bad idea, but a better fit) and then apologized ... and of course the brain dead liberals do not accept his apology and say it is far worse than the Meg Whitman thing.  Huh?

Yeah, as Ann Coulter likes to say... look at what they call you... and that will tell you that it is something they are far worse at.   But I do see a direction here ...Obama's Muslim extremist friends kill, planned Parenthood kills, the drug cartels Eric Holder gave guns to kills, hmmmmm

Very sad and disturbing.  Amazing how so many will blindly follow him.  If they would only realize the Truth shall set you Free!  :)

Meredith, thank you for posting this!  I find this appalling, but not surprising. How could any Christian ask God's blessing on mass murder?  Leave it to this administration.  No major network is covering the Gosnell trial, so half the country doesn't even know about it, the other horror stories, or the real truth about Planned Parenthood.  Tweeting it out for you.

Thanks Jerseygal!  Appreciate the retweet.  We really need to keep holding this administrations feet to the fire. The UNCRPD is on the move again!  I will keep the group updated as I get info, but get ready to make calls and tweet like crazy.  :)  Have a great night!  Peace of Christ-M

Please do keep us updated, Meredith.  UNCRPD will keep coming up, unless we send them a strong message that America will not comply with UN rule.

The Blaze has dissected this speech with quite a bit specificity.  Definitely worth adding the link here!  http://www.theblaze.com/stories/2013/04/26/obamas-5-most-controvers...

As we all know, saying God bless Planned Parenthood does not carry any weight when it comes from a man like Obama, who is Godless. 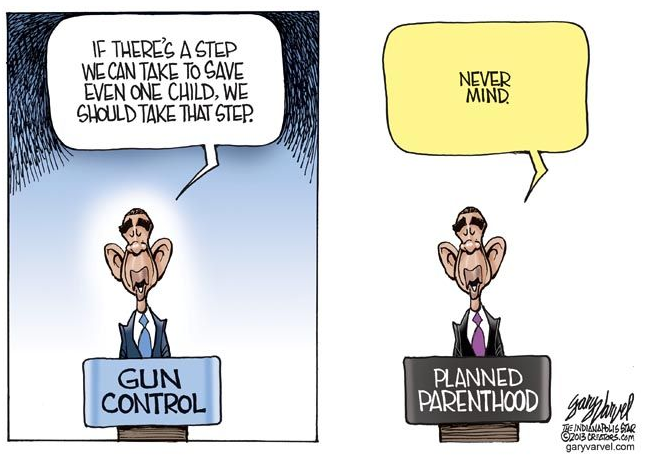 I saw this cartoon on Facebook courtesy of "Chicks on the Right".  Sometimes, they have some good thoughts and find some great stuff.

Thanks for posting this Meredith. Obama and all that follow him are evil. He is so disgusting and inappropriate, that words fail when trying to describe what he really is about. But there is no doubt in my mind, that the god obama serves, is not the God of Abraham, Isaac and Jacob. Thanking God for an evil organization that murders babies is got to be blasphemes.

I really mean this next part seriously.  As the left screams about Sandy Hook, and then also wanted that lady in Florida dead for apparently killing her young child, abortion of now even live babies has some serious affects on me.  If I leave the evil aside, for just a second, I find my biggest problem is confusion.  How can the left be just fine with live babies being killed by Gosnell and now we learn others, and that is called a feature when they scream that because of Sandy Hook all US freedoms after 200 years must go away?  How do the babies differ?  And no, I am not being cute, I find it confusing.  Some say this is a slippery slope.  For my tastes, I have already slid down it.  Can the left please mark the babies foreheads of the ones that should be killed and which need to remain alive?  When the lady was on trial in Florida for killing her young daughter, I admit confusion.  Where does the killing feature end and the murder horror begin?  Could not the lady just claim very late term abortion?  Is it okay for teenagers also?   Or is it just that the left wishes to do the killing?  And so the left is mad that 28 children got passed them and Planned Parenthood?  You can tell me I am mean, but I honestly find it confusing.

For those who scream about gun laws.  Unless they worry about all life, something it is clear Mr. Obama does not care about, then I am unwilling to listen. The most obvious nonsense on the left is how "selective" they are.  This is a feature, but that is a crime, yet both seem the same.  I think George Orwell in 1984 or Animal Farm spoke of "Doublethink" - the ability to hold two contradictory thoughts in ones brain at one time and claim they make sense.