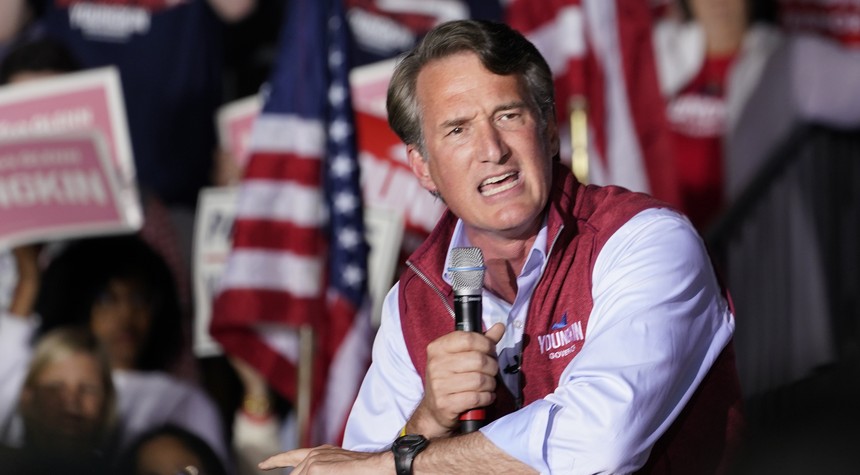 Glenn Youngkin, Winsome Sears, and Jason Miyares will be sworn in today, marking a sea-change of leadership in Virginia. More importantly, because actions ultimately matter, the three Republicans are already looking to take big steps toward fixing the mess left behind by Democrat Ralph Northam’s administration.

On his first day in office, Youngkin is going to sign an order to eliminate the state-wide mask mandate for children in schools. That’s in response to the overwhelming amount of data that masks in schools have been one of the most useless, asinine policies of the COVID-19 pandemic.

That move is already drawing backlash from the left, which is the surest sign that Youngkin could receive that he’s doing the right thing. There is no reason to continue muzzling kids, harming the learning environment, when masks are largely ineffective anyway and vaccines are readily available for teachers. Certainly, doubling down by attempting to move children to N95s, which require professional fitment and rigorous sanitization to have any real efficacy, would have been insane.

But while Youngkin is making the moves you’d expect, it’s the new Attorney General Jason Miyares that is already causing wailing and gnashing of teeth. He’s replacing Mark Herring, who ran the office in the typical far-left, woke fashion that led to a higher crime rate and deterioration of safety. Herring also let the various George Soros-funded district attorneys in the state run wild.

That’s about to stop.

This is the stuff real men are made of, we need more of this and I think we will, people are tired of all the "toro feces" from the commiecrats. All the petty tyrants have to go away, we won't put up with your BS anymore.

Somebody replace Newsom before my beautiful California is destroyed

Life is tough, and it's going to get even tougher on all these stupid democrats, Duke

Fire the Federal Reserve.  No more centralized banking in America.

Put every person who participated in 2020 voter fraud in jail.  EVERY. ONE.

Get the United Nations off of American soil and renounce US membership.  Let's see them scramble for $$$ with us out. Either revamp the United Nations building or tear it down and build a highrise, low-income apartment building, with first floor shops and medical offices.  The only people who can rent an apartment there are veterans of American Armed Forces who were honorably discharged, and/or their widows/widowers.

Any one else want to add to the list?

1) No more career politicians. Term limits should be placed on members of Congress and the Supreme Court

3) Outlaw Marxism\Communisms in all its forms

5) Voting on one day only

7) Counting should be completed in a limited time frame

I see your list and raise you: deport ALL illegal aliens and close the borders for 10 yrs which has been suggested.

This is the first test for the Younkin administration. How he responds will set the tone for his entire term.

Watchman replied to Jerseygal's discussion BREAKING: SCOTUS Overturns Roe (and Casey) in 6-3 Decision
"This is our biggest win since Trump won in 2016. It completely blindsided the left. It will be…"
9 hours ago

Jerseygal replied to Jerseygal's discussion British man turned away from giving blood after refusing to answer if he was pregnant
"I hear ya there Duke!  I do think we have a red wave coming in November.  I pray it will…"
Jun 22