Earlier this afternoon, Georgia become the first state in American history to pass the Convention of States application to limit the power and jurisdiction of the federal government.

The House voted to approve the Senate’s version of the resolution by a vote of 107-58.

“I am pleased that the Georgia legislature has given voice to the frustrations of millions of Georgians,” said State Sen. Cecil Staton (R-Macon), the resolution’s primary sponsor. “Enough is enough. It is time to impose fiscal and other restraints on our runaway federal government. We urge other states to join us.”

“We Georgians have become the hope of the Nation today,” said Jacqueline Peterson, the Georgia State Director for the Convention of States Project. “Many thanks to our State Legislators for standing for Liberty. May God bless us, every single one!”

Our deepest thanks go to our volunteers in Georgia. They took a stand for self-governance, and history will remember what happened in Georgia today. Because they decided to write a letter, make a call, attend a hearing, or meet with their state representative, they can tell their children and grandchildren they made a difference in the fight to preserve liberty.

We expect many more states to follow Georgia’s lead in the months ahead. These are historic times—I encourage you to remember this day and what it will mean for the future of our great country.

You can join the team in your state by signing up in the Action Center.

This is good news!  We can all contact our state legislators in favor of this.  I tweeted it out.

Seems good to me as well---all we need do is read the Constitution, and it becomes clear that sovereign States rights can, and should be, asserted.

In the time period before Revolution, the Founders had achieved adequate State government, and their Constitution fully protected such sovereignty. 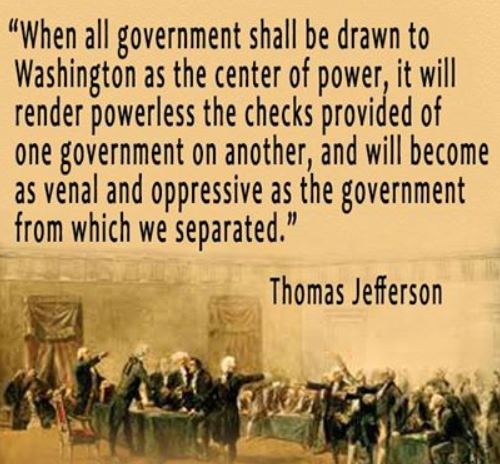 Agreed. We already have a Constitution that protects us from nearly everything we need to be protected against. The states are already sovereign and have the powers they need. They don't enforce the Constitution any more than the federal government does. Changing the words on a document, that none of our elected officials will enforce or follow, is not a good idea. We already have the document that we want and need. Who are the politicians, state or federal, that are up to the task of improving upon what our founders handed to us ?  I tremble when I think of it.

I just sent out tids on this.....I just don't know enough to decide.

Jodi, I took the liberty of posting your entire Tids email from today!  You really rock!  I'm doing a check out on that too!  Thanks, patriot sister!

Thanks, JG.....I think it's time for a discussion.

As Barry would say, this is 'above my pay grade'.  Sucks not to be ivy league.

I agree on time for a discussion.  Initially, I was really wary of this.  I was afraid that once our Constitution was opened up to change, the risk was that we could end up with changes to or elimination of Amendments I thru X.

As I understand it in really oversimplified language (no ivy leaguer here either), it only proceeds AFTER the agenda and rules are established and agreed upon unanimously.  Those elected officials, like Barry, who consider 'rules' to be mere nuisances to be ignored when they obstruct their agenda or desires, may still be cause for concern.  Like you, I want to read up on it more, including the opinions of those Conservatives whom have knowledge and understanding of the Constitution.  Thanks again for compiling all that information!  http://fundamentalrefounding.ning.com/forum/topics/articlev-convent...

I am not certain either where this leads.  But one thing that occurs to me... is we should start looking at tactics the other side is using.  Conservatives keep trying to be nice people while the other side lies, litigates, does abuse of power with IRS, and more.  Unless there is some backlash, and this is at least a backlash, of this and complaints back to them, and more investigations with teeth, then the left likely wins just because we are taking a butter knife to a shootout.

An example of this was the recent Lois Lerner issue.  She again took the fifth meaning the investigation goes nowhere.  But the left decides that the real issue is to kill Issa for not letting some liberal scream for hours about how he hates Republicans.  Of course that should have no place at a meeting like this.  But if the only screaming is on the left, then they win.

Patrick Henry's famous statement "give me liberty, or give me death" was made at a church house.

What rights, not already granted to us in the Constitution, are to come from this Convention of States ? What do we expect this Convention to accomplish that we feel we can entrust to our current "Representatives ?"