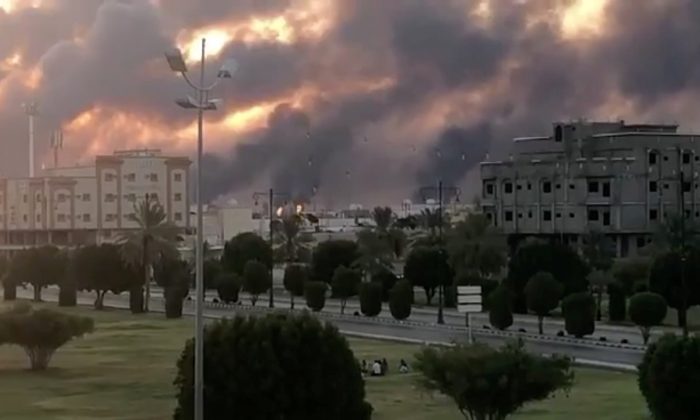 No one immediately claimed responsibility for the attacks in Buqyaq and the Khurais oil field, though Yemen’s Houthi rebels previously launched drone assaults deep inside of the kingdom.

It wasn’t clear if there were any injuries in the attacks, nor what effect it would have on oil production in the kingdom. The attack also likely will heighten tensions further across the wider Persian Gulf amid a confrontation between the U.S. and Iran over its unraveling nuclear deal with world powers.

Permalink Reply by Fundamental Refounding on September 18, 2019 at 7:16pm

Secretary Pompeo
@SecPompeo
·
Sep 14
Tehran is behind nearly 100 attacks on Saudi Arabia while Rouhani and Zarif pretend to engage in diplomacy. Amid all the calls for de-escalation, Iran has now launched an unprecedented attack on the world’s energy supply. There is no evidence the attacks came from Yemen.

Permalink Reply by Fundamental Refounding on September 18, 2019 at 7:24pm

Secretary Pompeo
@SecPompeo
·
51m
Met with #Saudi Crown Prince Mohammed bin Salman today to discuss the unprecedented attacks against Saudi Arabia’s oil infrastructure. The U.S. stands with #SaudiArabia and supports its right to defend itself. The Iranian regime’s threatening behavior will not be tolerated.

Permalink Reply by Fundamental Refounding on September 18, 2019 at 7:35pm

It looks like we may be going to have a response to Iran and their attack on Saudi Arabia.

“I have just instructed the Secretary of the Treasury to substantially increase Sanctions on the country of Iran!” President Trump wrote in a tweet on Wednesday, Sept. 18.

About 10 minutes earlier, the president wrote that it’s “so nice” that the United States is “energy independent” and in “better shape than ever before.”

Regarding the sanctions, neither Trump or Treasury Secretary Steven Mnuchin elaborated on what they might target.
https://www.theepochtimes.com/trump-says-hes-ordered-substantial-in...

Iran's Zarif Threatens 'All Out War' If Military Strike on Iran

Iran warned President Donald Trump on Thursday against being dragged into all-out war in the Middle East following an attack on Saudi Arabian oil facilities which Washington and Riyadh blame on Tehran.
U.S. Secretary of State Mike Pompeo has described the weekend strike that initially halved Saudi oil output as an act of war and has been discussing possible retaliation with Saudi Arabia and other Gulf allies.

Trump on Wednesday struck a cautious note, saying there were many options short of war with Iran, which denies involvement in the Sept. 14 strikes. He ordered more sanctions on Tehran.

Iran's foreign minister told CNN the Islamic Republic "won't blink" if it has to defend itself against any U.S. or Saudi military strike, which he said would lead to "all-out war."

Mohammed Javad Zarif earlier accused Pompeo of being part of a so-called "B-team," which Tehran says includes Saudi Arabia's crown prince and is trying to dupe Trump into opting for war.

Pompeo said on Wednesday that the attack was "of a scale we've just not seen before."

"The Saudis were the nation that were attacked. It was on their soil. It was an act of war against them directly," he told reporters before meeting Saudi Crown Prince Mohammed bin Salman.

Riyadh, which described the assault as a "test of global will," on Wednesday displayed the remnants of 25 Iranian drones and missiles it said were used in the strike as undeniable evidence of Iranian aggression.

The Saudi ambassador to Berlin said "everything is on the table," telling Deutschlandfunk radio that options need to be discussed carefully.

kwicgov55 replied to Robin's discussion UPDATE On Things At My Home and my being absent! Ref: Rick's Cancer
"Thanks for the update Robin. Keeping the two of you in my prayers. "
Sunday

Robin replied to Robin's discussion UPDATE On Things At My Home and my being absent! Ref: Rick's Cancer
"Thank you everyone for all your prayers. After a multitude of tests for 4 different doctors just to…"
Saturday

Ed replied to Watchman's discussion 10 Reasons Why I Believe Trump Will Be Reelected
"Well thought out reasons. I too believe President Trump will be elected. My biggest concern perhaps…"
Sep 23

Jodi180 replied to Watchman's discussion 10 Reasons Why I Believe Trump Will Be Reelected
"All my fingers and toes...and eyes...are crossed, Watchman!"
Sep 22

Lawrence Brown replied to Watchman's discussion 10 Reasons Why I Believe Trump Will Be Reelected
"Ten points are correct. We did not elect perfect man we elected a man who could fix our past…"
Sep 20

Jerseygal replied to Jerseygal's discussion History Is on the Side of Republicans Filling a Supreme Court Vacancy in 2020
"Worth reading the whole thing from the link.  It includes some charts to prove the points!"
Sep 19

Watchman replied to Watchman's discussion 10 Reasons Why I Believe Trump Will Be Reelected
"You're not alone. I've heard many Conservatives say the same exact thing. I debated about…"
Sep 19

kwicgov55 replied to Watchman's discussion 10 Reasons Why I Believe Trump Will Be Reelected
"All very good points Watchman! I did not vote for Trump in 2016, but have watched him and realize…"
Sep 19

kwicgov55 replied to Jerseygal's discussion Justice Ruth Bader Ginsburg dead at 87
"I may not have agreed with her politics, but Ruth Bader Ginsberg was a fighter! She fought cancer…"
Sep 19

Watchman replied to Watchman's discussion 10 Reasons Why I Believe Trump Will Be Reelected
"I've heard about that and I wouldn't lie that it doesn't concern me a little. I…"
Sep 19