Democrat Debate and the Myth of Attacking the Rich

The Myth Of Attacking the Rich

I will admit that attacking the rich sounds good, unless someone thinks it through. But history has shown us that when you attack the rich, you instead attack the Middle Class. (??) Several Politicians are again promising "free stuff" to anyone who votes for them. They promise to throw endless money at immigrants that they will not even have rules for. They do this in a country with massive debt growing faster these last 6 years more than ever before, and with a record 93 million Americans out of work, and a record number of people on food stamps. The money ... comes from ... where?

So why cannot you attack the rich? Because they are rich is the simple answer. Let me explain. If you are rich then your company likely runs on a huge profit margin, meaning you can sustain attacks. You can afford the best tax accountants, the best lawyers and you likely have houses in a few different countries. You therefore will not crumble immediately if taxes go up, but you may decide to not even do business in a country where the politicians have become too greedy and bite the hands that feed and clothe them. Then you might do business in a country with politicians who understand that, "You get more flies with honey than with vinegar."

But what about the Middle Class? Perhaps the American Dream of owning your own business is now dead, or partially dead in a US of huge taxes, huge regulations, unions and Obamacare. Too many government hurdles for something that was hard in the first place. But a person should ask that if rich people are evil, why would large companies let small businesses exist at all? And the answer is that small business run on tiny profit margins and long hours of work. The rich want nothing to do with long hours and tiny gains. Small businesses are often run by the Middle class who have little money, less profit - if any at all, no big tax accountants or lawyers, and not much chance of taking their business to another country.

And so when politicians attack the rich, meaning job creators, meaning those who have a business, the people who go first are those people who have less staying power, smaller profit margins, and no money to pay for expensive tax accountants and lawyers. And so when you attack the rich, you kill the Middle Class. We have done that for over 6 years now. The Middle Class is hurting and the rich get richer. And so some politicians scream, "We need more of this attacking the rich!" We do? You mean attacking the Middle Class and killing jobs, and therefore killing the US Middle Class, do you not?

Then the next thing the politicians say is, let us punish the rich even more! We will charge them even higher taxes and more regulations! We will FORCE them to do what we say. Yes, the land of the Free and the intelligent has become the land of the not so bright politicians who admire the stupid Monarchs of the Dark Ages who hate freedoms and continually use the word FORCE. They are going to FORCE people to invest in America (how?) They are going to FORCE Christian hospitals out of business blah ha ha ha since they do not kill enough babies. They are going to FORCE our children to learn the 5 Pillars of Islam in school, because, wink, wink, Obama is a Christian. It is all force, force, force, hate, hate, hate.

Meanwhile, for anyone who really looks. It is not working. The US is in huge debt and must print worthless money to pay its bills. The FED has forced low interest rates for years to make the economy look better than it is and to prop up the stock market - since who is going to invest in the US or banks at 0 interest rate? Nope, the stock market is a better investment deal - and in fact, the only game in town. Mirrors. Illusions. Lies. While the US economy suffers. Does no one know history? Argentina went down this path and went from a nation vying with the US to a problem. The USSR went down this path and went bankrupt. Venezuela went down this path and has big problems. Cuba, Greece, all good lessons - if someone looks.

When we grew up we heard that, "You catch more flies with honey instead of with vinegar." And we also know that for a store to be successful, it treats its customers better and has lower prices instead of what politicians do. Yes, politicians make lousy store owners. They raise prices, have regulations like every customer must wear green clothes and have purple shoes, and they must buy insurance demanded by the politicians - and in addition, the politician store owners wish to call their customers names like "Evil Capitalists!" And then they just do not understand why customers just go (outsource) to the store next to them who has lower prices and treats customers (investors) with respect. Investors instead shop at "El Bueno" the Mexican store, or "Chee Pee" the Chinese store who respects investors and encourages them.

But as this hate, and force and stupidity goes on, the Middle Class who have many fewer options that the rich, will be the ones to get damaged. And that has been happening now for 6 years. Some people say insanity is doing the same thing again and again and expecting a different result. Yes, I can believe that some politicians indeed seem insane. Or maybe they are just pure evil and want money in their time and to damage our children with massive debt and a crippled US.

Perhaps the new campaign poster of the politicians should be the old one from the Mad Comic book era, "What? Me Worry?" Of course Democrats would either need permission to use this slogan, or perhaps just one more of Obama's "Executive Orders" to steal it for the public good. Oh whoops, did I say steal? I meant public domain or something. 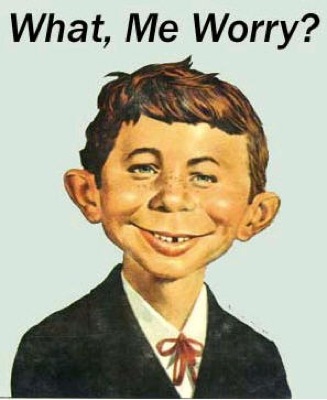 Jerseygal replied to Jerseygal's discussion BREAKING: SCOTUS Overturns Roe (and Casey) in 6-3 Decision
"I think you’re right!  I think there’s more to come! This is President…"
23 hours ago

Watchman replied to Jerseygal's discussion BREAKING: SCOTUS Overturns Roe (and Casey) in 6-3 Decision
"This is our biggest win since Trump won in 2016. It completely blindsided the left. It will be…"
yesterday

kwicgov55 replied to Jerseygal's discussion Texas Sen. John Cornyn booed by crowd at state GOP convention while negotiating gun control bill
"That "mob" is Cornyn's constituents, and that arrogant traitor should be booed every…"
Jun 23

Thank you for your invitation to post about my book, Jerseygal.  The link to it on Amazon is:   …See More
Jun 22
0 Comments 0 Likes