Church vs The State

This situation clearly has two sides - does the church have a First Amendment right to use the structure for worship, or does the village have the right to say what entity can operate in its various ‘zones?’   Surely the church would seek non-profit status for at least a portion of the real estate tax, which means that the village would lose all or part of that tax revenue.  I’d love to see some discussions!  Patriots, please weigh in!

CANTON – The village Zoning Board of Appeals will convene Monday, March 4 at 7 p.m. in the village courtroom, 61 Main St., to discuss and possibly act on request by the Christian Fellowship Center to use the property at 25 Court St. for professional office space.

The church was denied an office space use permit by code enforcer Jeffrey Murray in January. Murray’s denial is based on village zoning code which does not allow churches or religious organizations in the municipality’s C1 commercial zone where the property is located.

The CFC has recently launched a lawsuit against the village over the denial of a use permit to hold religious services at the 25 Court St. building formerly known as The Club restaurant. A denial of that use permit was handed down by Murray for the same zoning reason in January and subsequently upheld by the ZBA when the church asked them for a reinterpretation of village code.

Read more about the firms here.

The CFC bought the property for $310,000 at the beginning of January without securing any kind of use permit for the site and before receiving the ZBA’s decision. The ZBA’s support of Murray’s first denial was based on the village zoning code and the determination under federal Religious Land Use and Institutionalized Persons Act that the church was not being treated as less than equal to another organization or individual seeking use permits in the village.

The ZBA’s deliberations pointed out that other organizations and persons would also have to follow established village zoning laws to obtain use permits.

The C1 zone is a relatively compact area in the village’s downtown business district and was set up seemingly to concentrate commercial businesses in one area. Several other zones in the village do allow churches and religious organizations

Not really enough info to form an opinion on. Could be limitations thru zoning due to parking issues or any number of other reasons. If the zoning board reasoning is because it's a religious institution operating in town, well that's different problem.

Doug, I am not sure if Zoning Hearing Board transcripts are available.  I’ve argued both sides of this in my head for days - winters are long here LOL!

Any additional pros or cons with the info at hand?

Not quite sure on this. I know here it all comes down to zoning. When we got this property, it was zoned commercial. In order for us to build our house, we had to go before the zoning board and sign paperwork that we would not operate a business out of here. They then switched it to residential, but, the zoning board needed papers signed from us as well. This property was used for a business since 1976.

Robin, I see the benefits of zoning laws.  I was actually involved with planning and zoning.  I google-mapped this for you, Native.  I know the town as well.....this will help you all understand why it can be confusing, and lead some to believe that a First Amendment violation exists.  I marked the property in question with a red blob. 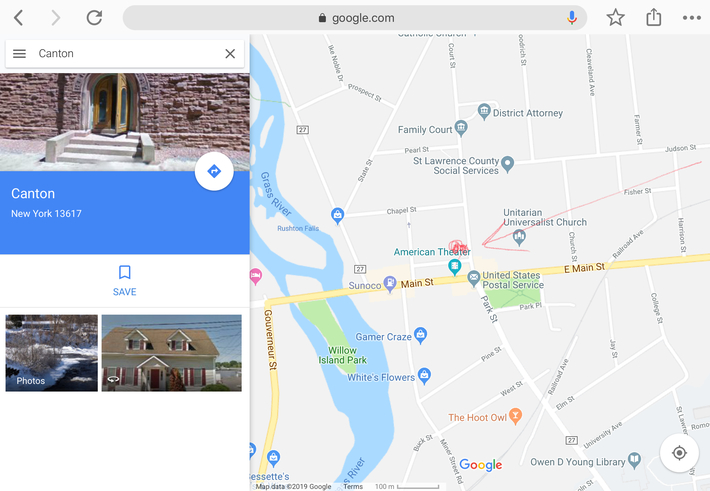 What isn’t shown are the numerous shops, restaurants, pizzerias, insurance offices, banks, locksmith, liquor store......all in within a 3 minute walk.

I'm getting what you're saying about it now. I believe it could be a violation of the 1st amendment. especially with other churches in close proximity and all the other things around it.

This sounds like a zoning issue, not a 1st. amendment right issue.

Hmm, that is something to think about.