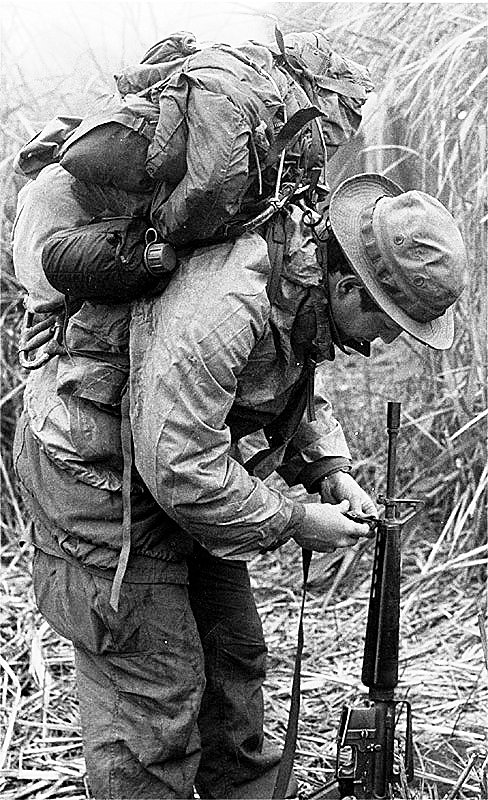 In the above photo, Al Gore looks down the barrel of his M16 rifle demonstrating why none of us should ever, ever consider giving a gun or rifle to a liberal.  I also understand that he might have had this photo on his website for awhile until perhaps someone told him it was not flattering.  And here you can see the real reason why liberals are against the second amendment - the chances of liberals killing themselves off is just so very, very high.  Well, if these people think deficit spending is fine and that Obamacare is free, they might be the same person to look down the barrel of their rifle.

THE STORY behind this

I was tonight at a handgun safety class, which is odd since I only have a rifle or two at this point.  But I think safety is a good idea.  There have been home break-ins near me lately - which is yet another plus of the Obama damaged economy and too many people out of work and so I am thinking of a handgun as well.  There were two instructors there, one Police, one who even teaches Military and FBI.  This was their favorite photo of what not to do.  They also did show a youtube of an instructor who was telling how wise he was who also shot his foot while telling the class how smart he was.

That pic is a testament to the adage 'A picture is worth a thousand words.' Good post, good luck with the continuing 'education.'

It is unlike me, but I am at lost for words!

Can you all imagine what it would have been like if this buffoon had actually been elected president during the aftermath of 911 instead of GWB? I am certain the Klintonistas picked him for their token VP for the same reason BO picked Joe Biden.
Wasn't for their good looks, was it? I remember driving through Tennessee and seeing signs dedicating a highway to his father. The signs were quick to note that this highway is dedicated to Al Gore, SR. The chucklehead couldn't even carry his home state. I know the Army taught better weapons management than this. At least they did
when I went through Basic Training. Two simple rules, "Consider all weapons loaded."
"And never point your weapon at anything unless you are wanting to shoot it." I am paraphrasing here but that was pretty much the gist. Looks like big Al missed that part of the training, eh? What a joke.

I do not own an M16 and in fact never shot one. But I do have a Ruger mini 14 ranch rifle that essentially shoots the same ammo: 0.223 (5.56 mm NATO). In the case of my rifle, if you take the magazine out, there can still be a bullet in the chamber. And in fact, many guns are that way. The magazine is really for the "next" bullet and not the "current" bullet. Now some people may be smart enough to also move the bolt action and get the chambered bullet out of there. It is not clear from this photo.

However, the two instructors we had would not care. They said people should ALWAYS treat all guns as loaded and never point them in the wrong direction. One of their first rules of guns is to never point them at anything you do not want to destroy. (So, I guess Al's head is not an issue ). They then showed us some gory shots of people who shot themselves with what they thought was an unloaded gun. There are also youtubes on the net of people shooting themselves with unloaded guns. Our instructor said several times that an unloaded gun makes the loudest noise. And if we all recall, an Amish girl was recently killed by a person cleaning their older style rifle (muzzle loader?) thinking their gun was empty. The Amish girl was shot in the head a mile away and died instantly and her horse carriage still took her forward.

So, yeah, for my tastes, it seems quite dumb what Al Gore is doing. Since I have an 0.223 rifle I can attest that they can be mean - which is why the Military often uses about that caliber size now. The Military has mostly stopped using the 30 caliber M1 types except for a brief trip back to the M14 also 30 caliber, and instead is using the 0.223 (5.56 mm NATO) type mostly in combat. It is rumored on the net in fact that bin laden was killed with a 0.223 round (or 5.56 NATO) from an HK416 rifle. That would be about the same ammunition in the Al Gore M16.

RN, I am bringing this to the front of the forum.  It has been picked up and crossposted on INGunOwners blog..  http://ingunowners.com/forums/general_firearms_discussion/279783-al...  hat tip to "ultra...good" deemed a 'Plinker,' who posted it there, and linked here.

The comments are pretty good there, and complimentary of your post!

In unrelated news today, Washington DC was brought to its knees.  There was a very limited power outage but it did trap 10 politicians on an escalator for 10 hours.

Ohhhhh pictures of that would have been sweet!

Well, to tell the truth, I may have exaggerated there for one of my jokes.  What was true in that remark was the time stamp.  But I say, from the stupidity I hear from Washington, it could have happened.

Permalink Reply by Jerseygal on March 15, 2013 at 5:58am
LOL... It probably did. It just didn't fit the narrative, and the media would not want to be embarrassed by their coverage of the event.....

kwicgov55 replied to Robin's discussion Senate passes USMCA, giving Trump back-to-back trade wins
"The only concern, is what type of compromises were made for the democrats in the house? Where the…"
yesterday

kwicgov55 replied to Fundamental Refounding's discussion Senate Opens Impeachment Trial Against President Trump: Chief Justice John Roberts Sworn In
"Of anyone that could be chosen to preside over the phony impeachment trial, Roberts is a traitor!…"
yesterday

kwicgov55 replied to Jodi180's discussion Journalist Accosted By Toronto Police at Soleimani Mourning
"Canada has fallen. Disgusting that the Canadian government has embraced the enemy and given them a…"
yesterday

kwicgov55 replied to Jerseygal's discussion The Iranian People Do NOT Hate America!
"Thanks JG. Love that as an Iranian, she spoke the real truth, not the lies fake news spews! Shared."
yesterday

kwicgov55 replied to Jerome's discussion SO, WHO STILL THINKS HILLARY WILL BE PROSECUTED???
"I agree Jerome. "
yesterday

Watchman replied to Jerome's discussion SO, WHO STILL THINKS HILLARY WILL BE PROSECUTED???
"I'm inclined to agree Jerome. One man can only do so much, and he wont be in office forever.…"
Friday

Jerome replied to Jerome's discussion SO, WHO STILL THINKS HILLARY WILL BE PROSECUTED???
"I admire you optimism Robin, I truly do.  I also hope you are proven right, very much…"
Friday

Robin replied to Jodi180's discussion Journalist Accosted By Toronto Police at Soleimani Mourning
"This is nuts! The world has gone insane."
Thursday